We are expecting Samsung to officially announce the Samsung Galaxy S4 Mini at their London press event on the 20th of June, and now it would appear that we may have some more specifications on the device.

According to German blog, All About Samsung, the Samsung Galaxy S4 Mini will feature a Qualcomm Snapdragon 400 processor, we had previously heard that the device would come with a dual core Snapdragon S4 processor. 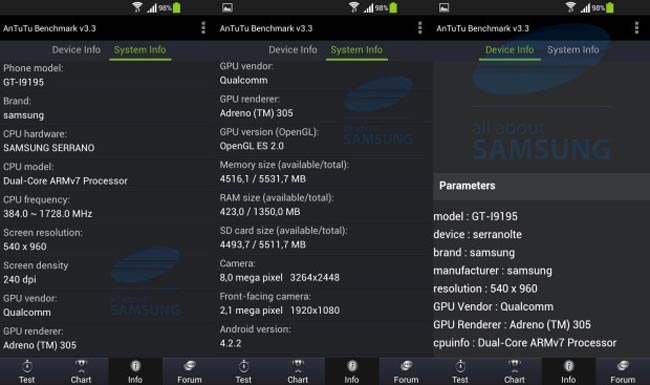 It is possible that Samsung will release a couple of version of the device, an LTE version of the Samsung Galaxy S4 Mini has apparently recently turned up in the AnTuTu benchmark, which you can see below.

The Galaxy S4 mini will apparently be powered by a 1.7GHz Snapdragon 400 processor, other specifications in the device are expected to remain the same, which will include a 4.3 inch qHD display with a resolution of 540 x 960 pixels.

The benchmarks also reveal some information about the S4 Mini’s cameras, the device will apparently feature a 8 megapixel camera on the back and a front facing 2.1 megapixel camera, both camera will be capable of full HD photos and video in 1080p.

The Samsung Galaxy S4 Mini is expected to come with Android 4.2.2 Jelly Bean, and it looks like the LTE version will come with 1.5GB of RAM, as soon as we get more details about the handset we will let you guys know.