A few days back, Samsung’s Lee Young-Hee confirmed that Samsung Galaxy Gear smartwatch will make its first official appearance in Berlin on September 4 along with Samsung Galaxy Note 3. As always, the notorious Twitter leaked, @evleaks posted an image of what seems to be a Samsung Galaxy Gear application for Android devices that will be used to control the smartwatch – with a high probability that it will be exclusive to Samsung smartphones. 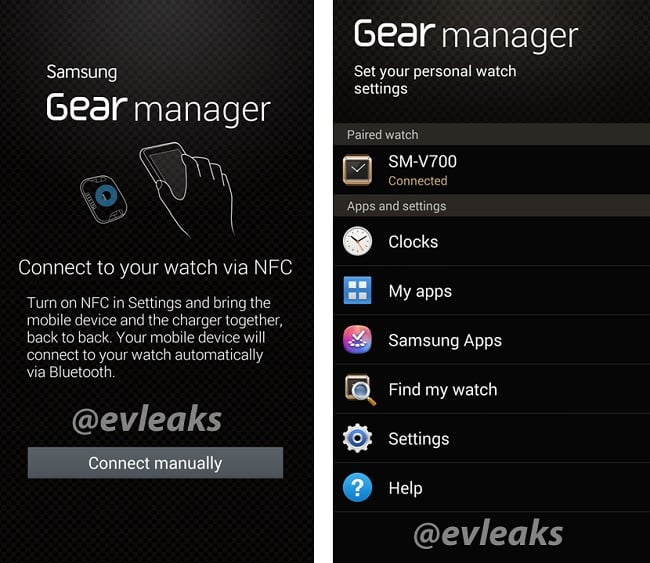 It appears as if the device will use Bluetooth to connect with the phone. The application also shows some of the features of Galaxy Gear application. It seems to have a “Find my watch” option that can be used to locate the missing smartwatch. The smartwatch may come with wireless charging capabilities as indicated in the screenshot above.

There have been a number of rumors about the specifications of the much-awaited smartwatch. Rumors suggest the device will feature a 1.67-inch display with a 320 x 320 pixels resolution, dual-core Exynos 4212 SoC clocked at 1.5GHz with ARM Mali-400 MP4 GPU, 1GB RAM and a 2MP camera. On the connectivity side, the device features NFC and Bluetooth to connect to the smartwatch as well.

The device is expected to see the daylight at Samsung Unpacked event in Berlin on September 4. Stay tuned.