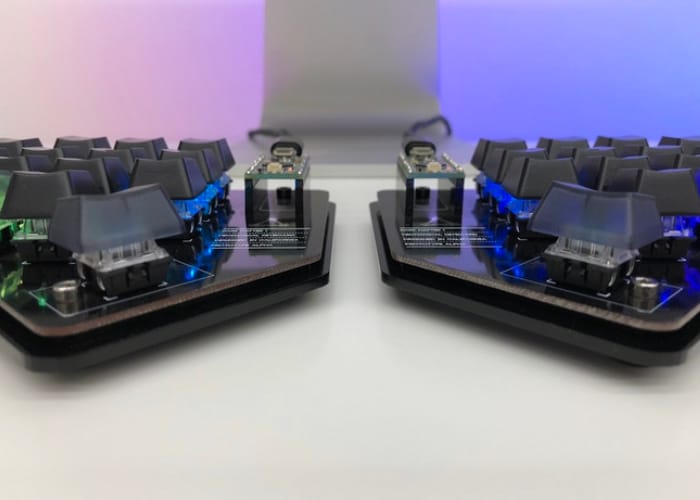 A new split mechanical keyboard has launched via Kickstarter this week in the form of the RIFT, designed to provide an ergonomic split keyboard that can be used for both typing and gaming at an affordable price. Watch the demonstration video below to learn more about its open design and mechanical features. The RIFT uses quality Gateron Blue mechanical switches, each of which is rated for 50 million keystrokes, giving you excellent longevity.

The RIFT ergonomic split mechanical keyboard is now available to back via Kickstarter with early bird pledges available from $139 or roughly £105 for a complete keyboard. Although if you would prefer just half a keyboard for gaming purposes left and right-hand sides of the RIFT are available to purchase priced at $79 each.

The development team at Atom Computers explain more about the inspiration behind the awesome split mechanical keyboard. “The humble keyboard hasn’t changed a whole lot in the past 40 years. Early hobbyist computers from the 1970’s actually used retrofitted typewriter keyboards as their main input source, and the design really hasn’t changed since. The typical staggered-row QWERTY layout designed for mechanical typewriters still exists today, and that’s a problem. That layout wasn’t designed to be comfortable, and millions of cramped wrists and sore fingers confirm that every day. Traditional QWERTY forces the user to contort their fingers into straining positions due to it’s staggered-row design. Enter the RIFT. We’ve fundamentally redesigned the keyboard with an emphasis on ergonomics, simplicity, and durability.”

For more information and full specifications jump over to the official Kickstarter crowdfunding campaign page by following the link below.