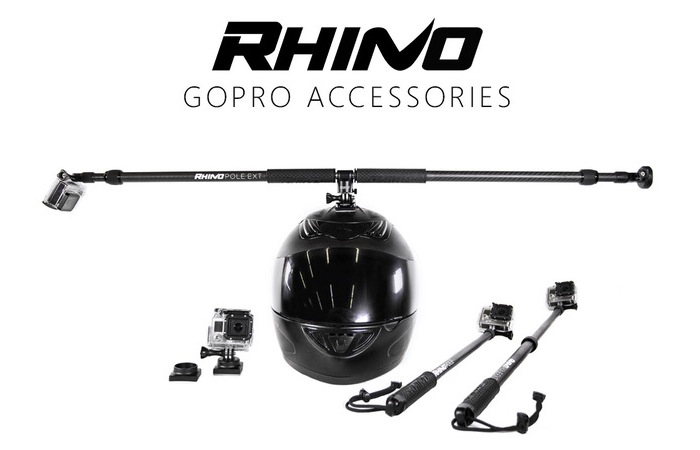 GoPro action camera owners that are looking for a professional way to mount their cameras helmets or simply have a different POV perspective whilst engaging in their extreme sports, might be interested in a new set of GoPro pole accessories and swivel mounts created by Rhino.

The Rhino GoPro pole and mounts provide users with the ability to capture unique camera angles and perspectives of their achievements, check out the video below to see how.

We also designed the Magnet Mount, a simple, yet powerful, magnetic quick release for the 360 Swivel Mount. It is designed to break away when excessive force is applied.  Simply mount the included curved base to your helmet using the adhesive pad. Then snap in the 360 Swivel Mount to start filming.

The Rhino Pole EXT in an extendable, carbon fiber GoPro pole that expands from 18 inches to 32 inches with a simple twist. The Rhino Pole EXT is built to be modular and go from being a hand-help pole, to a helmet-mounted extension pole, to part of the Rhino 360 Swivel Mount system. It’s extremely versatile, very durable, and is the only GoPro pole you’ll need to capture amazing footage.

We decided to make this pole 2 sections and 32” long because it is much quicker to deploy and infinitely stronger than what is available on the market. In our testing 32” was the max length most filmers needed to capture incredible footage.”

For more information on the new range of Rhino GoPro action camera accessories, mounts and poles, jump over to the Kickstarter crowd funding website to make a pledge and be one of the first to own the innovative camera mounting system.