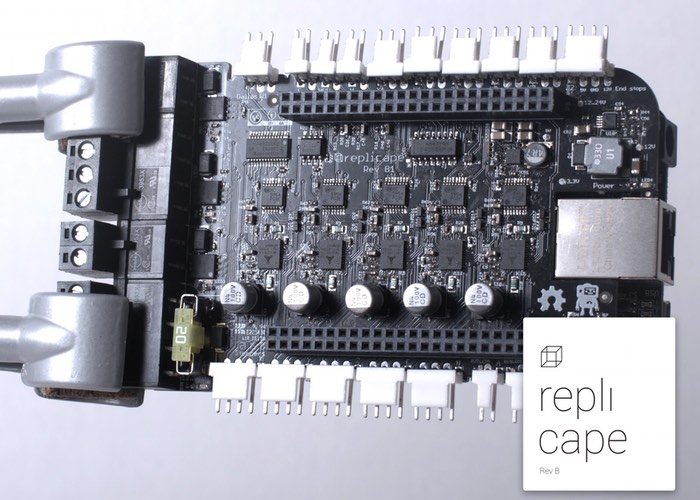 Elias Bakken has developed a new 3D printer control board called the Replicape, which he has designed to provide both quiet and smart features and functionality to help you build that perfect 3D printer.

As well as allowing you to control the mechanics within your 3D printer the new control board is also connected to the Internet and is accessible using your smartphone, tablet or computer.

Watch the video below to learn more about the Replicape control board which is taken to Kickstarter to raise the required funds to make the jump into production. Its developer explains a little more about its features and functions.

If you are building a 3D-printer and you want that printer to be connected to the internet, not be noisy and be accessible from every phone, tablet and computer in your office, you should get this board. All settings are controllable from software and end stop connectors double in function. Once the board is installed, physical access is no longer required. Dual extrusion, Single 12 to 24 V PSU, four fan ports, cold end monitoring, inductive sensor support and two servo outputs.

With OctoPrint, a browser based system for controlling the printer running directly on the board, all the units in your office or home will immediately have access to controlling and seeing the status of the printer. You can still use your favourite desktop application if you want though. One of the biggest problems with today’s printers is the noise level. Once you get into printing, the noise is half the fun, but when you want to be productive, it’s not that great any more. Replicape has state of the art stepper motor drivers (TCM2100) and a great 4 layer layout makes the board run smooth as silk.

Once a printer is connected to the local network instead of being tied to a printer, it becomes placement agnostic. That is great, but it does place a higher burden on the control of the printer through it’s native user interface. For that reason, Manga Screen has been developed, a 4.3″ high resolution multi touch display, perfect for controlling the printer. With all that power, the slicer is integrated directly on the board, just upload STL files directly and print.

For more information on the new Replicape 3D printer control board jump over to the Kickstarter website for details via the link below and to make a pledge to own one of the very first off the production line.