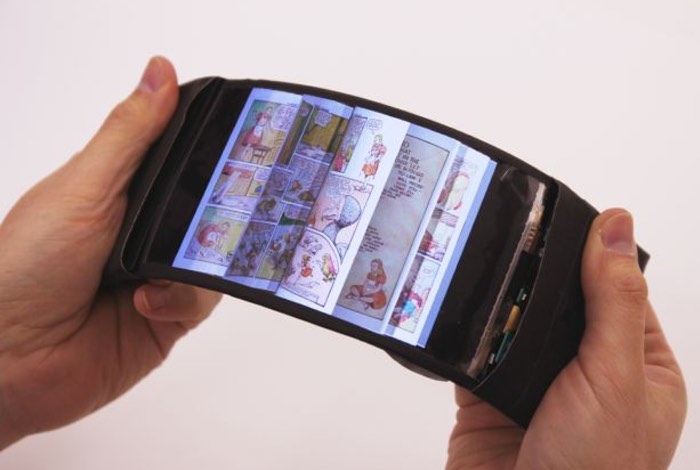 An interesting flexible display prototype device called the ReFlex that has been unveiled this week which has been created by researchers at the Human Media Lab at Queen’s University based in Canada.

The ReFlex takes the form of a flexible display that uses a 720p LG Flexible OLED screen that provides a resolution of 1280 x 720 pixels and is powered by a small Android 4.4 KitKat computer that is positioned to the side of the screen allowing it to flex unhindered.

The prototype device provides a glimpse into the future that may be coming, when the flexible displays we have all been promised start making their way to consumer smartphone products. Check out the video below to see the flexible display in action and how it reacts to gestures and flexing to provide a variety of new ways to interact with apps.

Unfortunately the flexible display is still in his prototype stages of development although Human Media Lab director Roel Vertegaal explains that he considers flexible display technology to be ready for consumers within the next five years.

When this smartphone is bent down on the right, pages flip through the fingers from right to left, just like they would in a book. More extreme bends speed up the page flips. Users can feel the sensation of the page moving through their fingertips via a detailed vibration of the phone. This allows eyes-free navigation, making it easier for users to keep track of where they are in a document.

This allows for the most accurate physical simulation of interacting with virtual data possible on a smartphone today. When a user plays the “Angry Birds” game with ReFlex, they bend the screen to stretch the sling shot. As the rubber band expands, users experience vibrations that simulate those of a real stretching rubber band. When released, the band snaps, sending a jolt through the phone and sending the bird flying across the screen.

As soon as more prototypes become available we will keep you updated as always on developments within the flexible display arena. For more information in the meantime jump over to the links below for further insight.