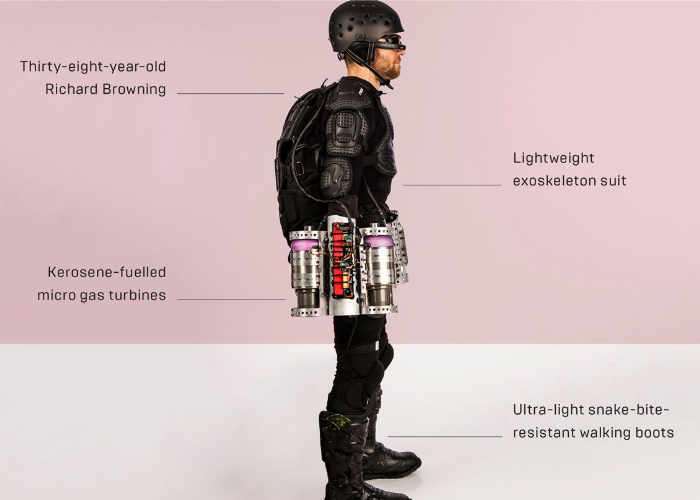 Anyone who has seen the Iron Man movies is sure to want their very own flying suit. But rather than wait for someone else to develop it British entrepreneur Richard Browning has started creating his very own rocket-powered flying suit.

Watch the development below which is now progressed to 6 jets and provides enough power to lift Richard off the ground albeit to only a few feet at the current time in the suit which has cost around £40,000 to develop so far.

Two and a half years ago, 38-year-old Browning decided he wanted to fly. Human-powered flight was, he knew, “a very eccentric realm.” Nonetheless, it fascinated him. He tried gliding with wings and electric fan motors, working weekends and evenings until his wife begged him to stop. Then he had an epiphany – what if he strapped a jet engine to his body and built a real-life version of Tony Stark’s iconic suit?

Nine months since his inaugural test flight and Browning’s intuition has paid off. His suit is a light exoskeleton attached to six gas turbines with a combined thrust of 130 kilograms. His feet are covered by ultra-light snake-bite resistant walking boots imported from the US. And his flights, from a few seconds, now last as long as twelve minutes.

One day in early summer last year, Richard Browning headed to his farmyard in the English countryside. He attached a kerosene-fuelled micro gas turbine – effectively a small version of a plane engine – to each of his arms and legs. Then he carefully pressed the throttle trigger in his right hand. For months, Browning had been working on this secret project. Now the moment of truth had arrived. In the modest surroundings of the UK countryside, “UK’s Iron Man” took to the sky.

For more information on the new real life Iron Man suit jump over to the Wired website for details by following the link below.