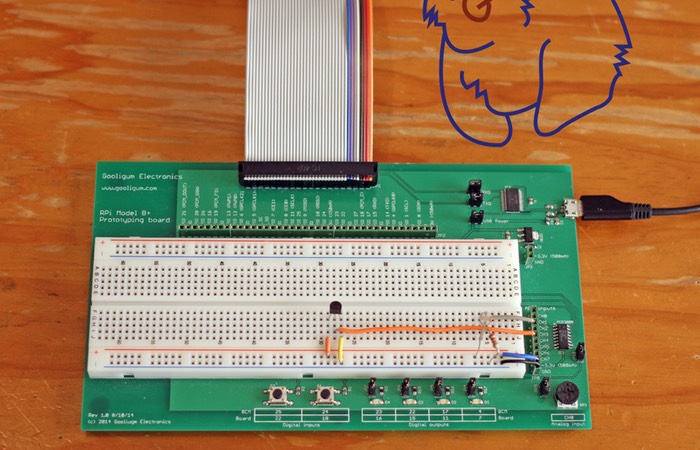 Anybody who enjoys building projects using the Raspberry Pi mini PC may be interested in a new prototyping solution called the Wombat board which has been specifically designed to be used with the Pi.

Wombat offers easy access to clearly labelled GPIO pins together with a solderless breadboard that doesn’t limit you to small, simple projects, and is also equipped with a number of push buttons and useful LED indicators.

The Wombat is the brainchild of David Meiklejohn from Gooligum Electronics who has launched his project over on the Kickstarter crowdfunding website looking to raise $5,000 AUD in funding to take the jump from concept introduction. He explains a little more about this new Raspberry Pi breadboard.

“I also added some features that I wished the Raspberry Pi had, such as:

– analog inputs
– a beefier 3.3 V power supply (the stock 50 mA isn’t much…)
– being able to use a micro USB socket to communicate with the Pi’s serial port, instead of only using it for power (as the Pi does)

It works with the newer Raspberry Pi models which include a 40-pin GPIO header, such as the A+, B+, and the new Raspberry Pi 2. It is supplied fully built and comes with a 40-pin IDC cable to connect it to your Raspberry Pi.  A comprehensive manual, including schematics, and example Python code will be available for download”

For more information on the new Wombat Raspberry pi board jump over to the Kickstarter website for details and to make a pledge from $60 AUD.