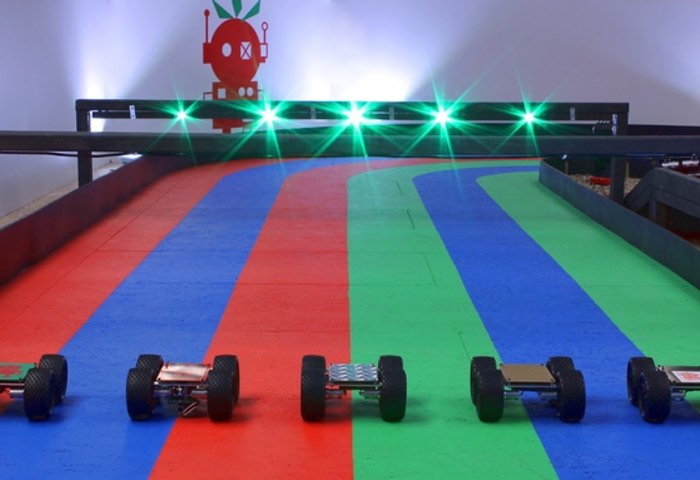 Raspberry Pi enthusiasts might be interested in a new autonomous racing series and robot racing club which has been created by Timothy Freeburn aptly named Formula Pi.

The new robot racing club uses systems that are based around the awesome Raspberry Pi mini PC has been created to get those interested, started with self driving robotics.

Watch the introduction video below to learn more about the Formula Pi racing circuit and the robot racing club.

Formula Pi is an exciting new race series and club designed to get people started with self-driving robotics. The aim is to give people with little hardware or software experience a platform to get started and learn how autonomous vehicles work.

We provide the hardware and basic software to join the race series. Competitors can modify the software however they like, and come race day a prepared SD card with your software on it will be placed into our club robots and the race will begin! The series will consist of races hosted here at PiBorg. The races will be live broadcast for everyone to watch online. Races will consist of up to 23 laps (approximately 1/2km) with 5 competitors per race. The robots will be provided by PiBorg for racing.

Grid position, competitor list and club robot assignments are assigned with a random shuffle script. Each competitor will be involved in a minimum of 5 races. We will have a complete structure once we know how many competitors are involved. The track was designed and built at the PiBorg offices. The 22.9m track has 5 corners and can be run in either direction. There is a built in timing rig and start lights to control the race. The colouring of the track helps the software identify changes in direction. You don’t need to be in the UK, you can enter the series from anywhere in the world. Just join and send code to compete!

For more information on the new Formula Pi club jump over to the Kickstarter website for details by following the link below.  If you are interested in creating Internet of Things projects or require a smart home hub you might be interested in our home automation hubs and system guide.