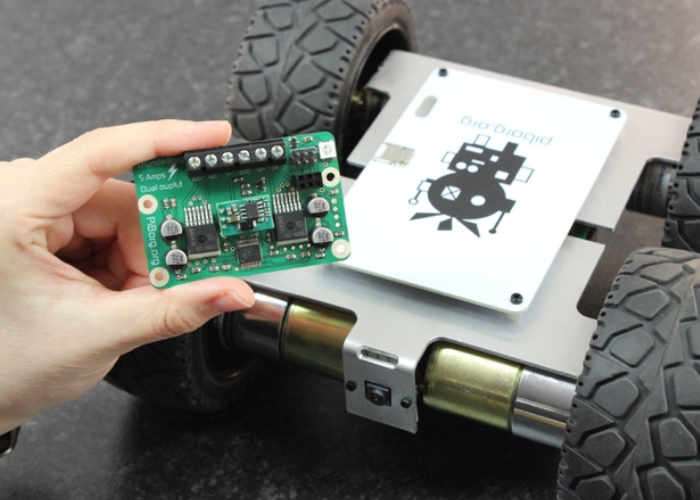 Anyone looking to learn more about robot vehicles or creating projects using the Raspberry Pi mini PC, may be interested in a new Raspberry Pi robot vehicle which has been created by Timothy Freeburn, based in the United Kingdom.

MonsterBorg has been specifically designed to be the ultimate Raspberry Pi robot and is equipped with an aluminium chassis, fast motors, off-road wheels and self-driving code as well as a powerful motor controller.

Features of the MonsterBorg Raspberry Pi robot vehicle include :

Making robots is hugely educational, and the ThunderBorg controller and MonsterBorg robot have been built to suit all skill levels. The ThunderBorg controller is supplied with an array of software to interface to the Raspberry Pi and to control the MonsterBorg robot. It can be used via game controllers and joysticks like a remote control car, through a web-based browser like a spy-bot to creep up on your friends, and it can also be controlled autonomously using self-driving code. The robotic possibilities are endless!

Rover robots are becoming extremely popular in education and the maker community. They can be used for all sorts of applications. We’re no strangers to making robots as you may know from our DoodleBorg robot, or from our Formula Pi standard robot – the YetiBorg. Getting your robot running in RC mode is the first step and this is loads of fun, but then it’s only a bit more complicated to control it from another room or even from the other side of the world. Once you have mastered that, you can investigate the world of autonomous robotics and make your robot do something really special.

Included with the robot is access to several examples for this including ball following code and self-driving robot race code. From there who knows? Perhaps add GPS/GSM to deliver a pizza to a friends’ house? The sky is the limit!

If you enjoy building Pi projects you might be interested in our comprehensive list of Raspberry Pi displays, HATS and small screens. If you are interested in building Arduino projects these may provide inspiration for your next project.