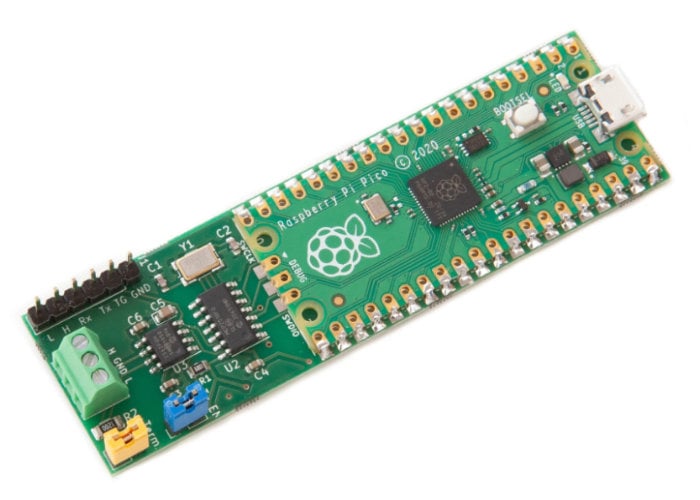 Raspberry Pi users may be interested in a new open source board capable of adding a CAN Bus to Raspberry Pi Pico and taking the form of the aptly named CANPico. CAN bus is a protocol used in hundreds of millions of devices including cars, trucks, buses, construction machines, ships, tractors, and spacecraft. The Canis Labs CANPico a carrier board in a ‘sock’ format for a Rapsberry Pi Pico: simply solder on the Pico and it is connected to an advanced CAN controller and transceiver, ready for connection to CAN bus wires via a simple screw terminal.

“Ken Tindell, CTO of CANIS Automotive Labs, demonstrates sending CAN frames with the MicroPython CAN API and a logic analyzer with a CAN protocol decoder in the video below using the CAN Bus board fitted with a Raspberry Pi Pico. The MicroPython SDK for CANPico contains two major APIs with CAN and CANHack. It includes priority-inversion-free drivers, accurate timestamping for both Tx and Rx, control of CAN ID filters, and a simplified CAN bit rate setup. You’ll find the SDK, KiCAD design files, as well as a hardware reference manual and a MicroPython SDK reference manual on Github.”

Features and specifications of the CANPico include:

MCU – Raspberry Pi Pico with RP2040 dual-core Cortex-M0+ microcontroller
CAN interface through 3-pin terminal block implemented via:
Microchip MCP2517/18FD (SPI) CAN controller with 2Kbyte buffer space
Microchip MCP2562FD CAN transceiver.
Jumpers to connect a standard 120Ω CAN bus termination resistor and for disabling transmit access to the CAN bus
6-pin header for a logic analyzer or oscilloscope to see what’s happening on the bus
Dimensions – Approx. 75 x 24mm

The CANPico open source board is now available to purchase priced at $45 or roughly £32 and is available with a Raspberry Pico pre-installed to the board if desired.