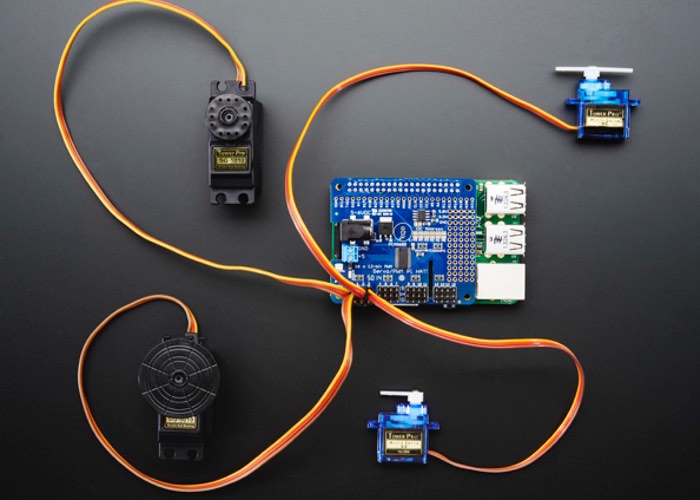 YouTube user 1nxtmonster has created a great motion sensing robot that can be 3D printed and is powered by a Raspberry Pi mini PC, check it out in the video below.

The Raspberry Pi mini PC is an awesome little piece of kit and when combined with sensors, and can you used for a wealth of different projects including robots, although it’s not the best at controlling DC Servo Motors.

It can also be used with the Model A or B if you use a tall 2 x 13 header instead of the included 2x20, says Adafruit. You can also stack 62 of them together to control up to 992 servos! YouTube user 1nxtmonster explains more about his awesome Raspberry Pi Robot :

A 3D printed robot with lights, sounds, and movements. It can drive around, move its arms, turn its head via pneumatics, and flash the LED lights. It is also equipped with a PIR motion sensor to detect when a person is present. The robot is controlled by an onboard Raspberry Pi, which utilizes Adafruit’s PWM Pi Hat to control all of the outputs. Coding was done in Python, the robot was drawn in AutoCAD 2014.

The robot is programmed to move around, flashing its lights and moving its arms. It then searches for motion with its PIR motion sensor. If motion is detected, indicating a viewer is present, it will begin a presentation about itself: “Hello. I am the XP1000 humanoid robot. I have many functions. I can drive around. I can flash my lights. I can move my arms. I can move my head. I am also equipped with a motion sensor, that is how I know to talk to you.” The program then repeats.