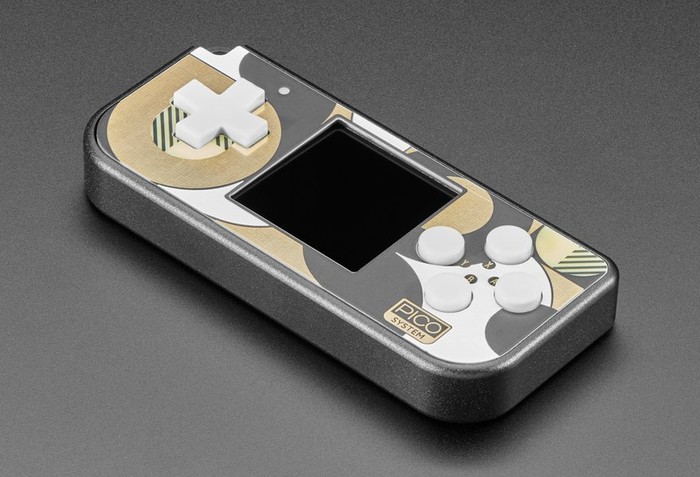 If you would like your own fully assembled Raspberry Pi handheld games console you may be interested to know that the Pimoroni PicoSystem powered by the relatively new RP2040 chip is now available from the Adafruit online store priced at $79.95.  Features of the Raspberry Pi handheld console include a 1.54″ colour SPI IPS LCD display providing a resolution of 240 x 240 pixels, 16MB of QSPI flash supporting XiP and powered by a RP2040 Dual Arm Cortex M0+ running at up to 133Mhz with 264kB of SRAM.

Not only is the Pimoroni PicoSystem a Raspberry Pi handheld game console but it also offers a wealth of potential as an experimental gaming platform and features broken-out debug pins on the PCB for if you want to program PicoSystem with an external debugger.

Jump to the 2.54 mark in the video below for more details on the Pimoroni PicoSystem Raspberry Pi RP2040 handheld game console.

“PicoSystem is a pocket-sized handheld games console, built around Raspberry Pi’s RP2040 chip (that’s the little fella that’s the core of a Raspberry Pi Pico). Build custom games in a cute system featuring a dual core microcontroller that can be programmed even by beginners – with a color screen and full controller setup. This handsome portable is great for folks who want to write video games or interactive art – and it can be coded in C, MicroPython thanks to Pimoroni’s great tutorials and examples.”

“Pimoroni has taken the dual-core RP2040 to the component spa and treated it to the full works: a big chunk of flash memory (16 MB!), a vibrant 240x240 IPS TFT screen, and a nice D-pad and buttons picked out by the most particular arcade enthusiasts. There’s also a piezo speaker for discreet retro bleeps and chirps and a rechargeable LiPo battery so you can take your homebrew games on the go.”