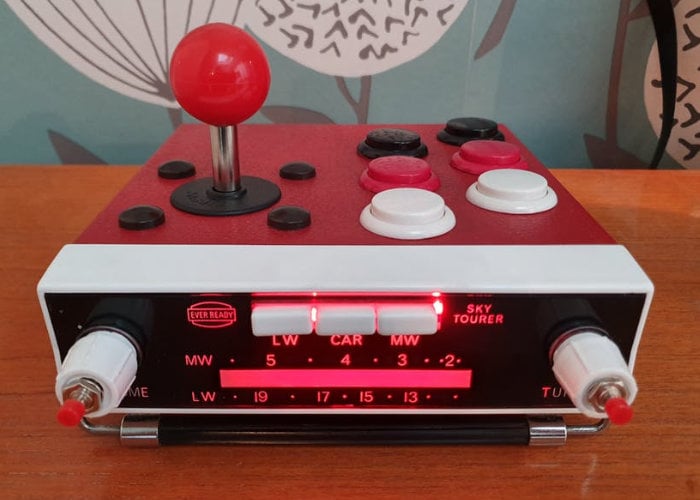 A cool Raspberry Pi games console has been created using a retro 1936 car radio providing a unique styling to the self-contained games emulator powered by the awesome Raspberry Pi 3 model B mini PC. The project has been built by Hackster.io member Martin Mander provides full instructions on how you can build your own using a similar car radio or some other supercool retro device.

As well as the Raspberry Pi few other parts we use including a Pimoroni Blinkt and of course the RetroPie arcade emulation software that allows you to play games from a wide variety of older consoles using your Pi as the power and processing unit.

“This is a 1963 Sky Tourer car radio that I’ve converted into a handy portable retro gaming console. It has a Raspberry Pi 3 built-in, with 6 arcade buttons and a joystick controlling those vintage RetroPie sprites via a Picade controller board. The radio’s original volume and tuning knobs are the perfect home for the Start and Select buttons, keeping them handy but out of mashing range.”

“Lighting things up is a Pimoroni Blinkt LED strip, which illuminates the radio’s semi-transparent dial with different colours, depending on the game console being emulated. It’s a self-contained game system, with a sturdy handle so you can carry it anywhere and play wherever there’s an HDMI port! It even has an extra USB port round the back so that Player 2 can join in, or a keyboard can be connected.”