After making a few alterations to the battery pack David has been able to fit the Rasberry Pi mini computer inside and create a fully functioning computer complete with Linux Raspbian operating system. 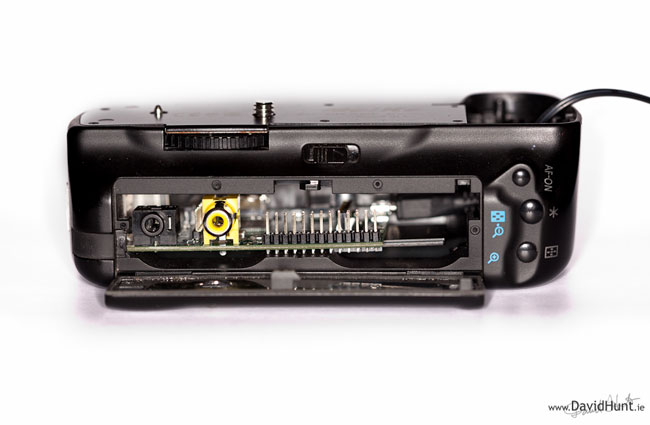 David modified the case of the battery grip to allow access to the mini computers USB ports and ethernet connection. The solution now provides David with a number of different photographic features include, wireless tethered shooting, controlling the camera via PC, intervalometer, and on-the-fly image conversion for faster previews on a remote display.

“There’s plenty of work to be done on the software side of things but the prototype is working. I can pull images from the camera and transmit them via either Wifi or ethernet. There’s a significant problem with the current USB drivers on the Raspbian linux disribution, though. After a few requests to the camera, the gphoto app responds with “Unknown Error”, and the only solution seems to be to unplug the usb cable and re-insert it. Not a workable solution, so I’ll have to look into that. Works fine on my other linux box, but a full-sized PC won’t fit into the battery grip!”

Together with the ability to now attach USB memory sticks or hard drives to backup images directly from the camera when needed. For more information on the ingenious Rasberry Pi hack jump over to the David Hunt website for more details. For more details on Raspberry Pi displays and HATS jump over to our essential guide.