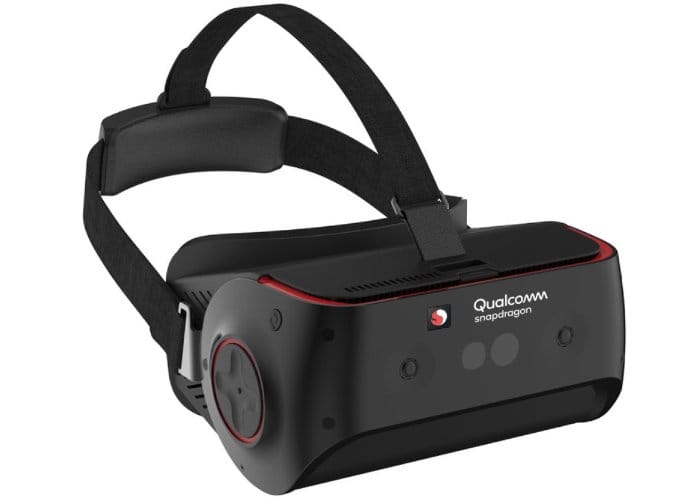 Ahead of next week’s Mobile World Congress 2018 technology event which will take place once again in Barcelona. Qualcomm has unveiled a new virtual reality headset reference design which is based on the Snapdragon Mobile VR platform and is equipped with a Snapdragon 845 premium mobile chipset.

The new Snapdragon virtual reality headset will provide users with a 30 percent faster processor that will use 30 percent less power than the previously launched Snapdragon 835 version. As well as being faster and less power hungry the Snapdragon 845 technology also brings with it a number of new advances including Adreno Foveation, Qualcomm’s foveated rendering using its Adreno GPU.

The new snapdragon Snapdragon Mobile VR headset is equipped with four cameras with two situated inside the headset pointing at a users eyes, to track their pupil location and orientation. Allowing the headset to render higher quality graphics directly where the users eyes are looking.

The latest mobile VR platform by Qualcomm will also support the company’s Roomscale tracking technology using inside-out 6-DoF (degrees of freedom) tracking with SLAM (simultaneous localisation and mapping) to enable users to engage in virtual reality environments and applications by standing rather than being seated for the whole experience. The technology is capable of detecting obstacles in front of you alerting you when they become too close allowing you to avoid them while remaining immersed in VR.

As more details are announced for the Qualcomm Snapdragon 845 mobile virtual reality headset next week during the Mobile World Congress 2018 technology event we will keep you up-to-date as always.