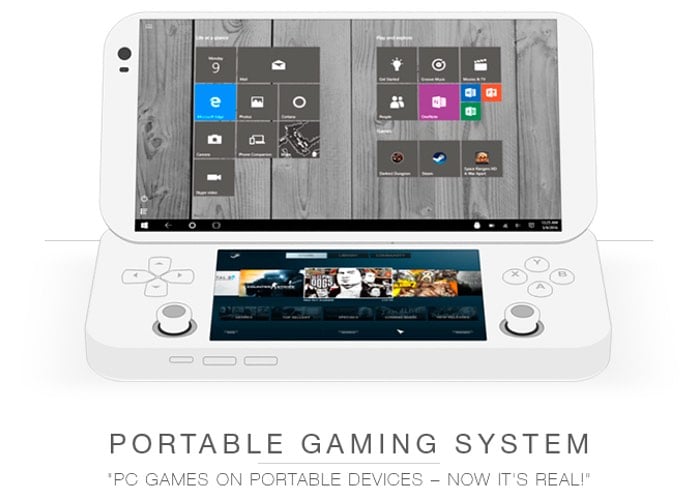 Update – It has been brought to our attention that there are a few concerns and possible issues regards this project. To find out more and make your own decision whether to back the project or not, read the raised concerns here.

With still 19 days remaining on the Kickstarter campaign, PGS LAB team behind the pocket sized PC games console, capable of running Microsoft’s latest Windows 10 operating system and Android, have already raised over $360,000 thanks to over 1,300 backers via Kickstarter.

Check out the video below to learn more about this unique pocket PC games console which provides dual boot capabilities between Windows 10 and Android 6 as well as streaming from PC, PS4 and Xbox One.

The Chinese creators of the pocket sized PC games console explain a little more about its development and design :

We are developing PGS during last two years. Engineers from Japan, China and Russia are actively working on the development of it. Our partners from China guarantee the possibility of production of such consoles in their manufacturing facilities with scalable amount of produced devices.

Each stage of our product development involves as various engineering tests, as well as testing on real gamers, including both aspiring and professional players. Preliminary agreements with independent investors guarantee us proper realization of the project, even in case if there are any additional expenses due to various reasons.

The main help, which we are waiting from Kickstarter and its community, is to identify the interest of end-users in our product and the wide range of problems, which can be solved with it. We are really waiting for your support, which will give us clear answers for these questions.

For more information on the new portable PC games console jump over to the Kickstarter website for detailsAnd who made a pledge from $230 for early bird backers via the link below.