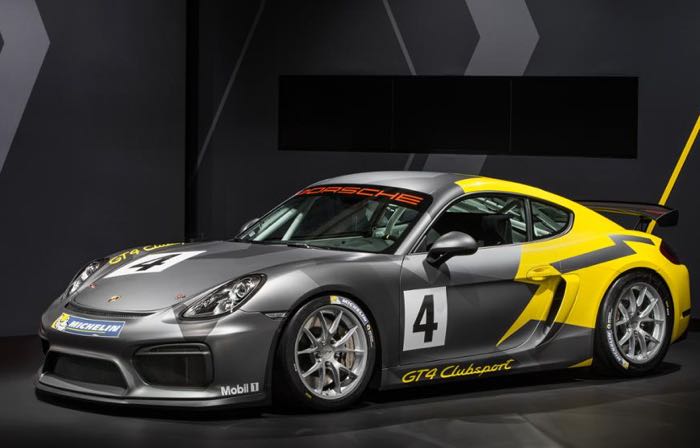 Porsche have taken the wraps off the track only version of their Cayman GT4, the Porsche Cayman GT4 Clubsport which was unveiled at the LA Auto Show.

The Porsche Cayman GT4 Clubsport is based on the Cayman GT4 and it comes with range of modifications over the road going version.

Porsche has added a new sports car for recreational and club racing to its fleet. The 283 kW (385 hp) mid-engine racer for motorsport newcomers, which is not road homologated, is based on the successful street-legal Cayman GT4 sports car. Sales of the racing car start with the unveiling at the trade show.

Just like its exceptionally race-worthy production sibling, the Cayman GT4 Clubsport is powered by a 3.8-litre flat-six engine, positioned directly behind the driver’s seat. The racing version exclusively features a modified six-speed Porsche double clutch transmission with shift paddles on the steering wheel and a mechanical rear-axle locking differential specifically for racing.

It has the same 3.8 litre engine and also Porsche’s PDK automatic box, but it features the front and rear suspension from the 911 GT3 Cup.

Prices for the new Cayman GT4 Clubsport will start at €111,000 exclusing taxes and it is now available to order from Porsche.