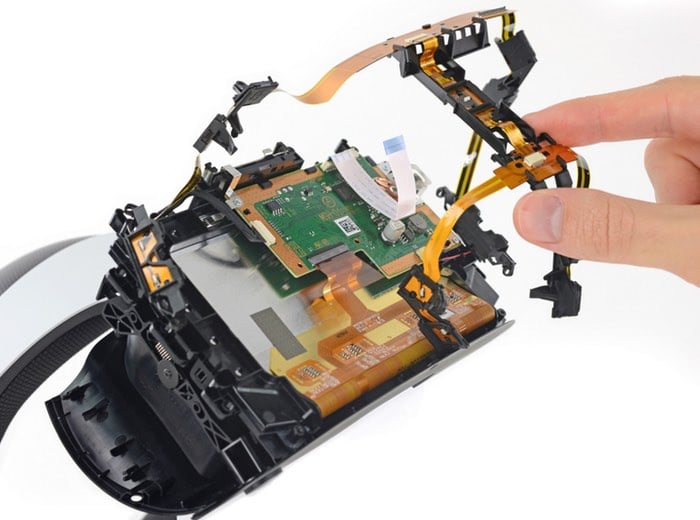 As you might have expected iFixit has wasted no time taking their toolkit to the new PlayStation VR virtual reality headset, which launched worldwide yesterday and is now available to purchase priced at $399.

Sony has added a six-axis inertial measurement system to the VR headset comprises of a three-axis gyroscope, three-axis accelerometer, weighing in at 610g. iFixit explains a little more about dismantling the new Sony PlayStation VR headset, which the team awarded an 8 out 10 for repairability with 10 being the easiest to repair.

We’d say that VR was for startups and übergamers until now, but Sony has been perfecting their headset for yeeears. With gaming giant Valve and up-and-comer Oculus already established, can the PlayStation VR measure up? Time to dive into the hardware of this latest PlayStation accessory and see what it’s bringing to the fight!

Positive remarks from iFixit include :

– Thoughtfully constructed and fairly straightforward to disassemble.
– Many pieces, such as the cushions and light shield, snap in place with no fussy fasteners or adhesive.
– Standard JIS J0 screws are used throughout. You can take it apart with a single driver that’s likely already in your electronics toolkit (Phillips drivers work for JIS in a pinch).

Negative remarks from iFixit include :

– Adhesive is mild, used sparingly, and mostly easy to remove. However, the lenses are firmly glued in place.
– Complicated piece of hardware with a lot of extra trim pieces that would be difficult to reassemble without guides.

For the full PlayStation VR teardown jump over to the official iFixit website via the link below.