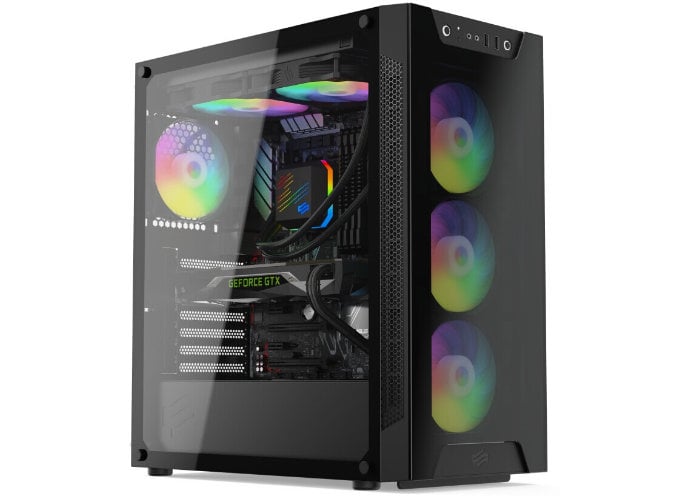 SilentiumPC has this week introduced three new PC cases to its range in the form of the Armis AR6X EVO TG ARGB and Armis Armis AR6X TG RGB both of which are now available to purchase priced at €83, together with the slightly more affordable Armis AR6Q EVO TG ARGB price at €65.

– Armis AR6X EVO TG ARGB PC case – With one tempered glass side-panel and another panel in the front, the Armis AR6X EVO TG ARGB really puts the components in the spotlight and creates spectacular lighting effects. A total of four Stella HP ARGB CF and one Sigma HP 120 mm case fan provide above-average internal ventilation. The fans are arranged in such a way that three Stella HP ARGB CF are installed in the front and one in the back. The Sigma HP 120 mm fan supports the airflow by exhausting the warm air upwards. This ensures effective cooling of the components right out of the box. The case fans operate at a maximum rotation speed of 1.200 rpm and can all be controlled by using the mainboard’s fan controller function in combination with the included Advanced Aurora Sync Evo PWM ARGB Controller. Of course, all air intakes are fitted with dust filters.

– Armis AR6X TG RGB PC case – The Armis AR6X TG RGB is also equipped with a front and side panel made of tempered glass. The four Corona HP RGB 120 mm axial fans with ring-type RGB lighting lend the chassis a more discreet look. One Sigma HP 120 mm fan is pre-installed in the upper segment of the case in order to ensure an above-average airflow at a maximum speed of 1.200 rotations per minute. Thanks to the included Advanced Aurora Sync Evo PWM ARGB controller, the fan speed can be conveniently adjusted using the PWM signal from the mainboard.