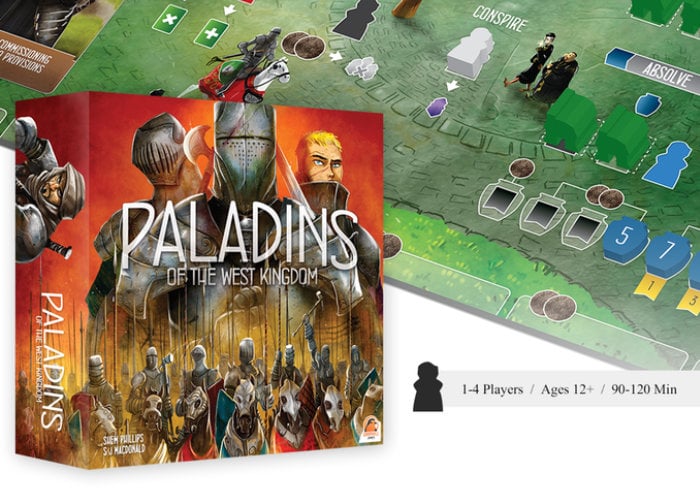 Serial board game designer and Kickstarter entrepreneur Shem Phillips latest game, Paladins of the West Kingdom, officially launched via Kickstarter earlier this year and has raised over $388,000 thanks to over 5,000 backers would still nine days remaining on its campaign. Watch the demonstration video below to learn a little more about the features of the Paladins of the West Kingdom board game which requires players to build fortifications, commission monks and defend the city.

“Paladins of the West Kingdom is set at a turbulent time of West Francia’s story, circa 900 AD. Despite recent efforts to develop the city, outlying townships are still under threat from outsiders. Saracens scout the borders, while Vikings plunder wealth and livestock. Even the Byzantines from the east have shown their darker side. As noble men and women, players must gather workers from the city to defend against enemies, build fortifications and spread faith throughout the land. Fortunately you are not alone. In his great wisdom, the King has sent his finest knights to help aid in our efforts. So ready the horses and sharpen the swords. The Paladins are approaching.”

For a full list of all available pledge options, stretch goals, game mechanics an components listed below jump over to the official project page on Kickstarter.

– Unique gameplay experience with interesting and tough decisions to make each round
– 12 unique Paladins and more than 60 Townsfolk and Outsider Cards provide a huge amount of depth and replayability
– Multiple paths to victory, thanks to the Suspicion system, Attribute Tracks and wide array of potential Townsfolk and Outsider combinations
– Just the right amount of player interaction, with no take-that mechanisms
– Intuitive and easy to use solo play mode
– Over 250 cards and 240 wooden tokens