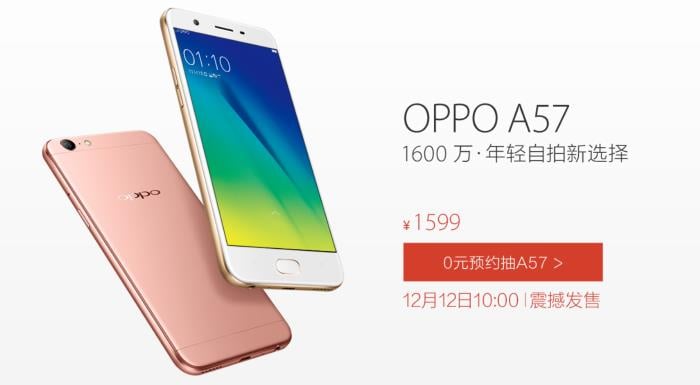 Oppo has introduced another budget-friendly handset dubbed as the Oppo A57 earlier today in China carrying a decent set of specifications on board.

The handset is set to hit retail in the country on December 12th carrying a price tag of RMB 1600 in China. The handset is also expected to launch in other international markets.

The handset ships with a 5.2-inch LCD screen with 2.5D curved glass and a 720 x 1280 resolution and a Snapdragon 435 processor under the hood clocked at 1.4GHz. There’s 3GB of RAM, 32GB of internal storage and a microSD card slot which supports up to 128GB of expandable memory.

The all-new Oppo A57 also features a 16MP rear-facing camera with an f/2.2 aperture as well as a 13MP front-facing camera, a 2,900 mAh battery and ships with Color OS based on Android 6.0 Marshmallow as its operating system out of the box.