Oculus Rift development kits have started shipping in the last few weeks, but if like most gamers you haven’t had a chance to have a hands on go with the Oculus Rift yourself. 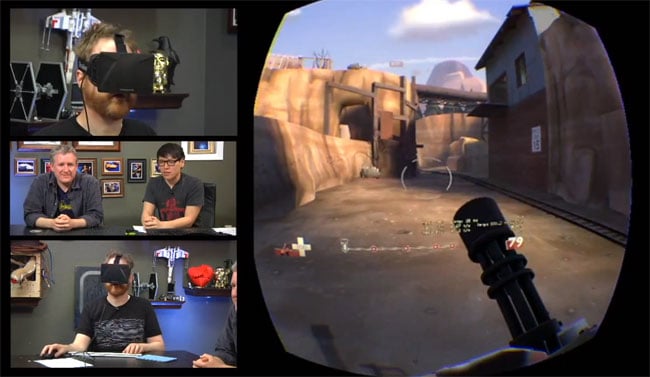 The Oculus Rift is a high field of view (FOV), low-latency, consumer-priced virtual reality (VR) head-mounted display which is currently in development by Oculus VR, who have raised $2.4 million from a successful Kickstarter campaign.

“Originally the prototype used a 5.6 inch screen, but after the unexpectedly successful Kickstarter, Oculus discovered that panel wasn’t available in sufficient quantities. So they changed their design to use a new, 7 inch screen. The pixel switching time is significantly faster, reducing latency and motion blur when turning one’s head quickly.”

“We have one of the first Oculus Rift development kits in house, and spend the day testing it in Team Fortress 2. Watch how this virtual reality head-mounted display works in-game with every available control setting, as Will practices rocket jumping and we discuss the promises and challenges of VR.”