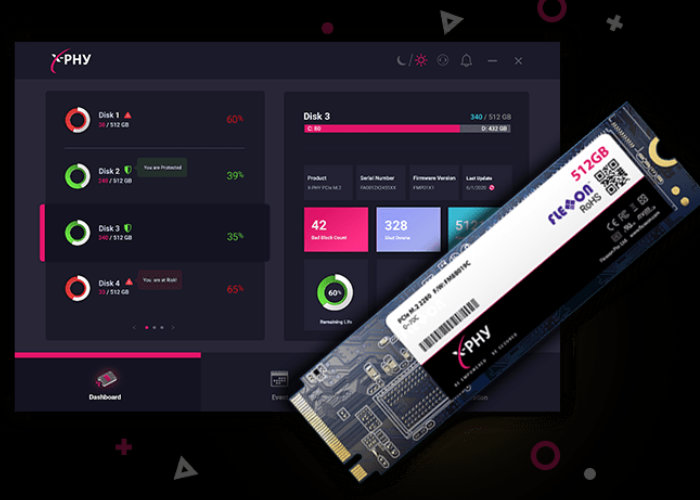 Flexxon has today launched the world’s first solid-state drive (SSD) embedded with artificial intelligence (AI) data security, in the form of the new Flexxon X-PHY AI-embedded NVMe SSD. The new SSD is currently entrance with government agencies and medical and industrial clients and although not yet available to consumers is expected to roll out to businesses by September 2021 and mass consumer market early in 2022. Camellia Chan, founder and chief executive officer of Flexxon explains in the press release “With innovations like the X-PHY, we will be better equipped to leverage on the benefits of technology while safeguarding ourselves against rising cyber threats.”

“As the “last line of defence” to protect data at the hardware level, the SSD is able to guard against both remote and physical attacks, boasting a range of features including temperature sensors to detect unusual movements that occur. In the event of such an incursion, the device – also known as X-PHY – will alert the user via email and lock itself to prevent any physical tampering. Users may then unlock the device via a dynamic authentication process. For clients with high security needs, such as the military, data may be automatically wiped should the device fall into the wrong hands.”

Users can already make their pre-order with 25% off via the companies website.

“Projected by Cybersecurity Ventures, the cost of cybercrimes will greatly increase from $3 trillion in 2015 to over $10.5 trillion by 2025. Also, 63% of the companies have reported that there was a potential compromise due to hardware or silicon-level security breach over the past 12 months.”