Apple unveiled its highly anticipated iPhone 5S and iPhone 5C yesterday. The upgraded iPhone 5S brings a much faster A7 processor, fingerprint scanner and all new colors. On the other hand, the colorful iPhone 5C brings the same iPhone 5 in a polycarbonate exterior with similar set of specifications. Now, the competition is already heating up and many vendors have started posting tweets about what they think of the new iPhone lineup. One of the major things that they are targeting is iPhone 5S camera plus the color options for iPhone 5C. 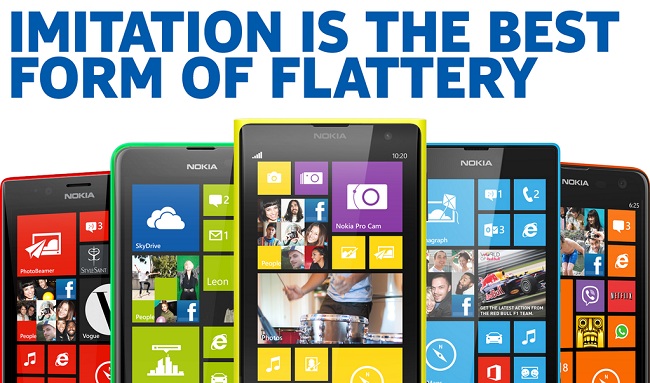 After the event, Microsoft posted a tweet captioned “5 things Apple didn’t announce today” with a link and saying that its time you should switch to the 41MP camera phone – Lumia 1020. The link posted redirects to an image of Lumia 1020 with markings of the five features that Apple failed to introduce in their recent flagship device, as per Microsoft. This includes the 41MP camera with reinvented zoom, Nokia Pro Cam application that brings wide range of camera features to make you a better photographer, a 4.5-inch AMOLED display, ability to customize the start screen and live tiles that automatically updates your start screen.

Microsoft wasn’t the only one to make fun of the latest iPhone 5S. Nokia also jumped into the situation with a picture of its colorful Lumias with a simple caption, “Imitation is the best form of flattery.”

There are a number of tweets posted on both accounts that are making fun of the recently launched iPhone lineup. We’ll find out soon enough whether the latest iPhone 5S is a success or not.