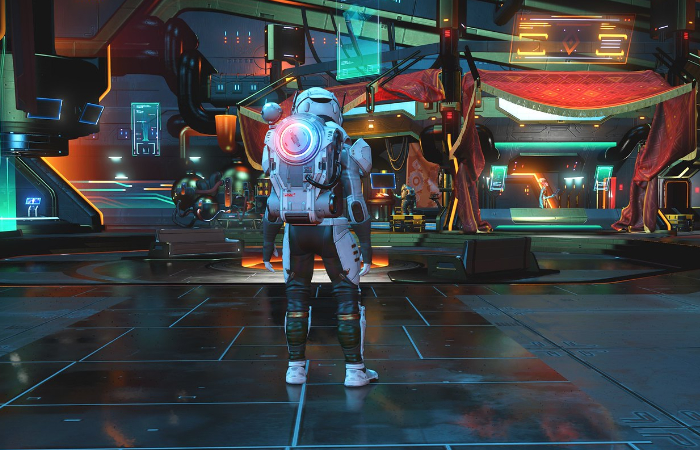 Sean Murray Founder of Hello Games the development team responsible for creating the No Man’s Sky space exploration game, of this week released a new update in the form of the free to download Prisms, bringing with it a wealth of new features and enhancements to give the “sci-fi adventure a visual overhaul”.

“Whether in the depths of space, on synthetic structures or on organic planetary life, everywhere you look there are now stunning details like reflections on your spacecraft, more detailed caves, enhanced lighting in space stations, realistic water and weather effects, and even more variety with fur on creatures and pets!”

New features and enhancements rolled out in the No Man’s Sky free Prisms update include:

– Volumetric Lighting – New styles of volumetric lights improve the lighting in a number of areas, including starship and vehicle lights as well as environmental effects.
– Warp Effects – The audio and visual warp effects have been completely reworked for a dramatic new interstellar experience.
– New Caves – Caves have been completely reworked, with new lighting effects, more detailed environments and greater variety of generation.
– Parallax Occlusion Mapping – New parallax occlusion mapping technology brings extra texture detail and depth to planetary structures and the Space Anomaly.
– Star Effects – The variety, quality and number of stars in the sky have been significantly improved.
– Improved Rain Effects – Rain effects have been significantly improved, bringing storms to life in a new way. As the rain continues to pour, the ground and other objects in the world become slick and coated with water.
– Improved Torch Visuals – The Exosuit torch now benefits from improvements to its visual effects as well dynamic brightness and positioning improvements.
– Refractions – New lighting technology brings refractions to No Man’s Sky. The new effects can be seen all over the universe, including on glass base parts; starship cockpits; forcefields and more!
– Space Station Core – The Space Station hangar has been dramatically overhauled for a brand new visual experience.
– Creature Fur – Fur has been added to a wide range of planetary creatures, bringing both extra variety and extra fuzziness to exploration and companion taming.
– Extra Planetary Details – Players on PlayStation 5 will see a dramatic increase in planetary detail across a whole range of environments.
– Screenspace Reflections – PlayStation 5 players will find reflections and improved lighting quality in the Space Anomaly, space stations, Atlas stations, freighter hangers, derelict freighters and more for PlayStation 5 players.
– Photo Mode Improvements – Photo Mode now benefits from significantly improved depth of field quality and controls, as well as now giving photographers manual control over bloom settings.
– Appearance Modifier UI Refresh – The UI for the Appearance Modifier has been refreshed for a cleaner and clearer customisation experience.
– Exotic Companions – The range of creatures that can be adopted as your companion has been hugely increased to encompass virtually every lifeform you encounter.
– ByteBeat Sharing and Drum Improvements – The ByteBeat Synthesizer now allows you to save tracks in a personal library, use them as a custom soundtrack to your exploration experience and share tracks with other players. Significant improvements have been made to the ByteBeat’s drum synthesizer, allowing for the creation of meatier drum loops and driving rhythms.
– Dynamic Weather Objects – Hazards such as meteors or lightning impacts now have a chance to spawn valuable objects, offering rewards to those who brave extreme planetary weather events
– Move Freighter Bases – When purchasing a new freighter, your existing freighter base is automatically transferred and reconstructed. – Freighter base layouts can be reset at any time from the Freighter Upgrade Control terminal.
– Recipe Station on Nexus – A new terminal has been added to the blueprint research area of the Space Anomaly. This new automated research station will provide recipes for crafting components, in exchange for nanites.
– Quality of Life Improvements – A number of UI and quality of life improvements have been added. These include: an icon to show when new items have been added to an inventory; improvements to the UI when receiving several blueprints at the same time; and improvements to planetary charts so that they will not be used up if they fail to find a building and will now give more detailed error messages.