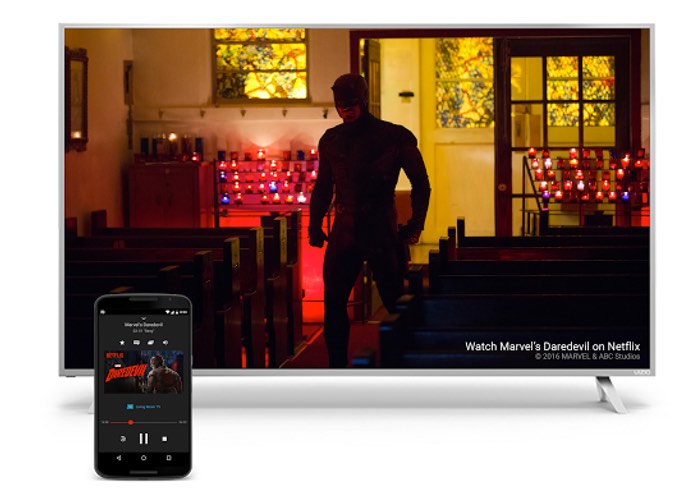 Vizio has this week unveiled new TVs and sound bars they have created which come fully equipped with support for Google Cast built in saving you the expense and hassle of purchasing a Google Chromecast device.

The built-in Google Cast technology allows you to access streaming media from the likes of Hulu, Netflix, MLB.tv as well as being able to mirror your chrome browser to your large screen TV from any smaller device it may be running on.

Vizio also provides a 6 inch tablet with its P-Series TVs which can be used instead of a traditional remote control and provides the ability to also run other applications that are available on the Android operating system. Vizio explains more about their P-series TVs.

The P-series now comes with Google Cast built in, which means you can use your smartphone or tablet as your remote to cast your favorite entertainment directly to the big screen. Simply tap the Cast button from apps like Netflix to watch Daredevil, YouTube to stream daredevil stunts, or Google Play Music to get pumped for your own stunts.

You can also mirror any website from the Chrome browser on your laptop. So whether you’re planning your next vacation and looking through flights and hotels with the family, or want to share a video from your last epic trip, just look for the Google Cast extension in the corner of your desktop browser.

The P-Series also supports casting Ultra HD (up to 4K) and Dolby Vision High Dynamic Range content (bright, clear colors!). Included with every P-series is VIZIO’s 6” Android tablet remote, a tablet that lives in the living room and can cast all your favorite content.

Vizio is not the only company that provides hardware which comes equipped with Google Cast built-in and joins others such as Harman Kardon, Onkyo,Philips and Bang & Olufsen who have added the Google Cast technology to their B&O Play “one-piece music systems”.