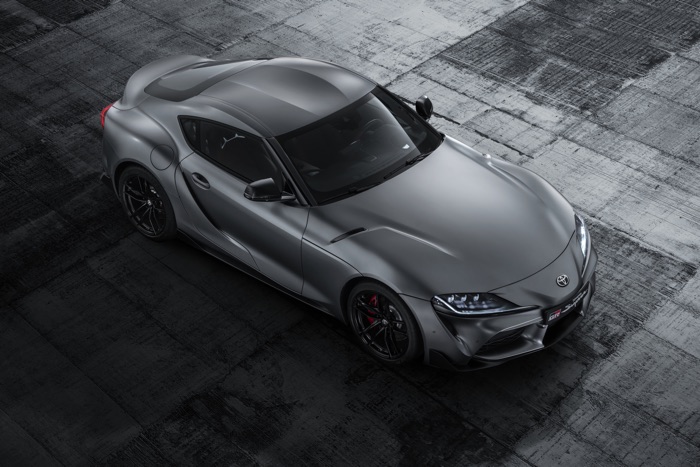 The new Toyota GR Supra was made official earlier and now Toyota has release a couple of videos which give us our first look at the new Supra.

The car comes with 335 horsepower and it has a 0 to 62 miles per hour time of 4.3 seconds, it is powered by a 3.0 litre turbocharged engine.

The performance heart of the new Toyota GR Supra is its 3.0-litre in-line six-cylinder engine, producing up to 335bhp/250kW and 500Nm of torque. It is fitted with a twin-scroll turbocharger, high-precision direct fuel injection and continuously variable valve control that secure segment-leading torque performance from very low revs. The unit is powerful, well-balanced, smooth and light revving, with an exhilarating acceleration feel.

It is matched to an eight-speed automatic transmission that provides lightning-fast up and downshifts, with short ratios selected for the lower gears; the driver can take control of gear changes using paddle shifts on the steering wheel, and can select Normal or Sport driving modes to suit their preference and the conditions. A Launch Control function enables powerful acceleration from standstill with maximum traction, helping the car move from rest to 62mph in just 4.3 seconds. Engine sound and response, shift pattern, damping, steering and active differential performance are adjusted when the driver selects Sport mode. The Vehicle Stability Control has a special ‘track’ setting that can be selected, reducing the level of system intervention so the driver has greater control of the vehicle’s dynamic performance.

Pricing for the car starts at around £53,000, you can find out more details about the new Toyota Supra over at Toyota at the link below.