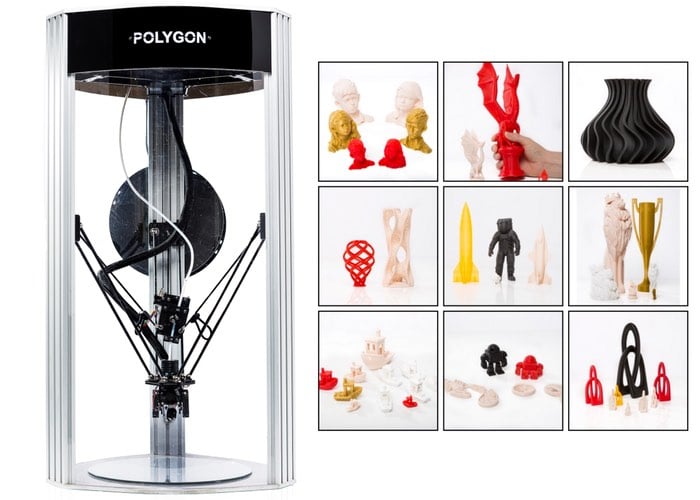 Billy Zelsnack based in Pittsburgh has created a new “thoughtfully designed” delta 3D printer kit which she has launched over on the Kickstarter crowdfunding website and has already raised enough money to take the project forward into production.

Watch the video below to see why Zelsnack picked a Delta 3D printer and what makes his kit different from others currently on the market. Pledges for the 3D Delta printer are now available from $500.

Why A Delta? There is just something about the motion of a delta robot’s arms purposefully building an object layer by layer that is mesmerizing. Of course there are technical reasons such as the potential for faster speeds with less print artifacts, easier scalability, backlash preload via its geometry and gravity, faster vertical travels, the hotend moves rather than the print, triplicated identical mechanisms for maintenance and manufacturing simplicity, and high visibility during the entire print.

– Nice Prints. A properly setup delta 3D printer is capable of very nice prints with excellent layer alignment quality. Click on the image below to browse a variety of high-resolution photos of prints from during the development of this machine.

– Large Build Volume. A build volume of 10 inches in diameter by 12 inches gives you room to grow as your 3D printing skills increase.

– Magnetic joints. This popular upgrade is standard for this kit and provides for near zero backlash at its joints.

– Leveling Probe. The micro-switch leveling probe flips down directly below the nozzle for increased accuracy and calibration simplicity.

– Genuine E3D Lite6 Hotend. The hotend is one of the most important components in a 3D printer and the Lite6 is a reliable workhorse that is included standard.

– Built-in Part Airflow. Many popular print materials require a lot of airflow directed at the part to help deter warping and delamination. Rather than common axial fans the kit includes a powerful blower fan.

– Enclosure panels. The included enclosure panels help to maintain a more stabilized printing environment and keeps drafts and curious hands and paws outside of the machine while still providing high visibility.

For more information on the Polygon Delta 3D Printer Kit jump over to Kickstarter via the link belowA.