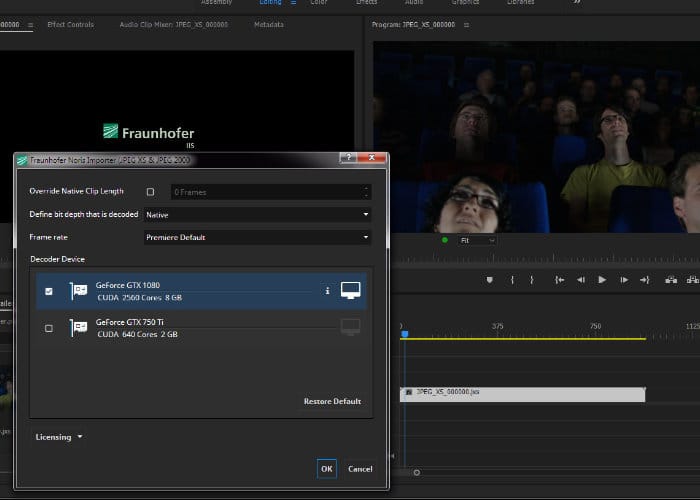 At the NAB Show 2018 currently underway in Las Vegas the Fraunhofer Institute for Integrated Circuits IIS has this week announced the first JPEG XS codec implementation for video production. Demonstrating the JPEG XS codec as an input format for post-production in a software plug-in for Adobe Premiere Pro CC with real-time playback capability of 4k60p UHD video.

The JPEG XS codec is relatively new and offers standardisation by ISO/IEC SC29 WG1 for IP workflows in studio environments, local video networks and VR/AR applications. Are any applications that require transferring high-resolution video data over standard Ethernet or other wired connections. “With ever-increasing amounts of data from higher resolution and dynamic range in videos, long-distance transmission from coax cables in studios will soon become outdated. At the same time, production companies and studios are trying to substitute specialized cables and switches for video transmission by commercial off-the-shelf (COTS) components with the introduction of simple and cost-effective IP transmission over standard Ethernet infrastructures.”

The codec is has been optimised for the use with mezzanine compression when high image quality data has to be transferred via limited bandwidth or has to be processed with limited computing resources, says Fraunhofer. With the Fraunhofer IIS JPEG XS development can be used for the “lowest complexity and platform-independency applications at compression ratios from 2:1 to at least 6:1”. For more information jump over to the official Fraunhofer Institute website.