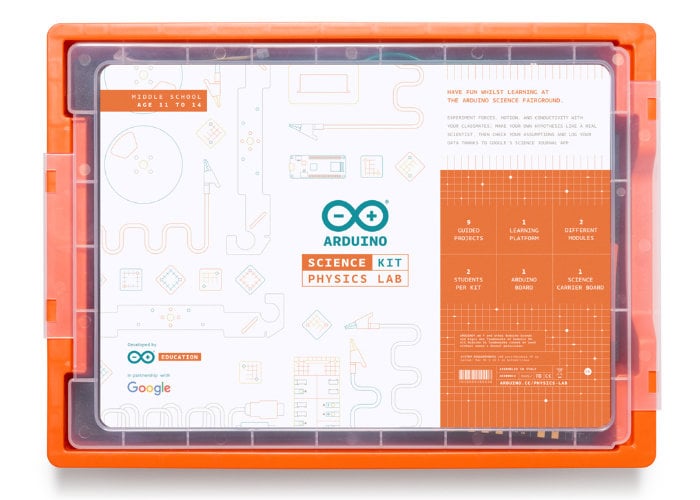 Google and Arduino have joined forces to launch a new Arduino Education Science Kit designed for students between the ages of 11 and 14. The new Arduino kit has been created to provide a hands-on experience allowing them to explore forces, motion, and conductivity.

The Arduino Science Kit Physics Lab supplant in a hard case together with a MKR WiFi 1010 and all the parts needed to assemble and carry out the experiments and will be available to purchase directly from the official online Arduino Store sometime during March 2019. No details on pricing have been announced as yet, but as soon as they are we will keep you up to speed as always.

“Students can make their own hypothesis like a real scientist, then check their assumptions, and log data thanks to Google’s Science Journal app — a digital notebook for conducting and documenting science experiments using the unique capabilities of their own devices. The kit, based on the MKR WiFi 1010, includes a range of sensors to measure light, temperature, motion, and magnetic fields, as well as a set of props and full access to online course content for teachers and students to conduct nine exciting science projects inspired by popular fairground rides like the Gravitron and Pirate Ship.”

“The Arduino Science Kit is perfect for developing transferable skills such as critical thinking and problem solving through an inquiry-based learning approach. The projects featured in the kit have been aligned with several National curricula including the Next Generation Science Standard (NGSS) for K-12, and the National UK Curriculum, so teachers can be assured that the Physics Lab is not only easy to set up and fun to use, but also contains all the necessary lesson plans and physical experiments for students to actively engage with their learning.” – David Cuartielles

For more details jump over to the official Arduino blog by following the link below.