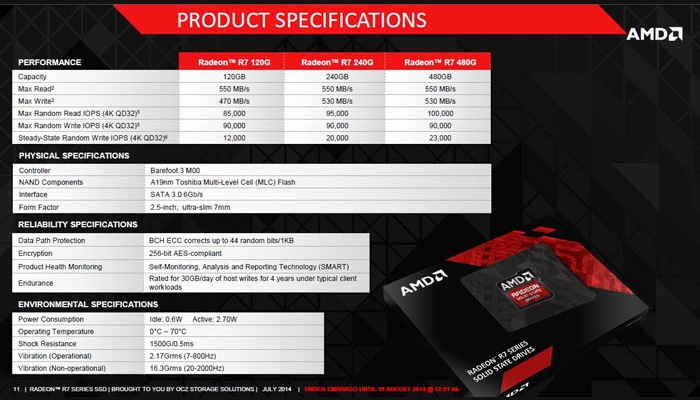 AMD is currently in the process of preparing to launch a new range of solid state drives (SSD) which it has created specifically for the gaming market and will launch under the Radeon brand.

The new AMD SSD range will be available in a variety of storage capacities including 120GB, 240GB and 480GB and will compete directly with the likes of Intel, Samsung and Kingston who already have SSD products in the market.

The news of the AMD SSD solid-state disk range was leaked earlier this week via a product specification image (pictured above) but has now been confirmed by an AMD representative. Explaining that AMD plans to make an official announcement about their new SSD range next week.

Unfortunately no information on pricing or worldwide availability has been announced or leaked by AMD as yet, but as soon as information comes to light next week, officially from AMD we will keep you updated as always. Computer World explains a little more about the state of the SSD market :