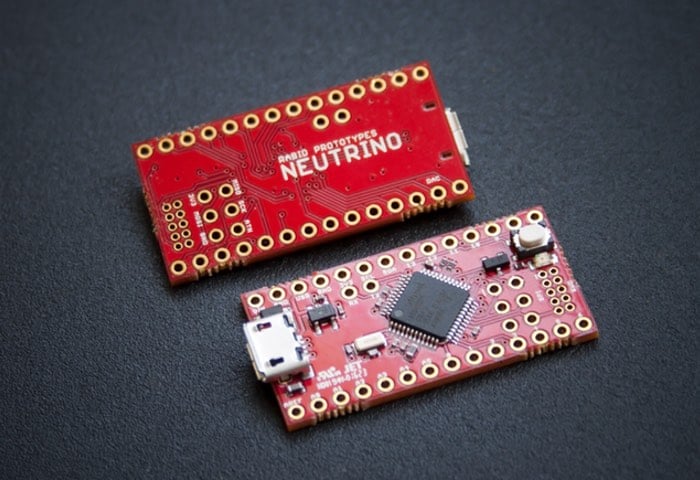 Arduino enthusiasts might be interested to know that Rapid Prototypes have this week launched their new second-generation Neutrino 2.0 development board which is Arduino Zero compatible.

The Neutrino 2.0 has been designed to provide users with an open source and expensive miniaturised version of the Arduino Zero, which is perfect for projects that require a smaller form factor.

Rapid Prototypes explain more about its specification and features :

Featuring a 32-bit ARM processor running at 48MHz, and boasting 32K of ram, the Neutrino is far more capable than your typical Arduino. And because it has the same processor and pinout, all libraries written for the Zero will work on the Neutrino without any modification! Finally, being open-source, you’re free to modify it as you wish and integrate it into your own designs – without ever needing to pay any royalties or licensing fees!

The new version of the Neutrino adds RX/TX pins that were often requested, and is designed to be a bit cheaper to manufacture so that I can continue to offer them at this price point. The USB OTG circuit, which required a costly power multiplexing chip, buffer, and transistor, has been replaced with an inexpensive very low forward voltage diode to isolate the battery from the USB supply. The micro AB connector has also been replaced with a less expensive, but just as sturdy, micro B house part. In addition, the 3.3V LDO regulator, reset button, and status LED have also been changed to house parts. But don’t be alarmed; these aren’t downgrades. The regulator is a nice modern Texas Instruments part, and the new reset button is slightly larger and has a nicer feel to it!

Specifications of the Neutrino 2.0 include :

For more information on the new Neutrino 2.0 and full specifications jump over to the Kickstarter website for details by following the link below.