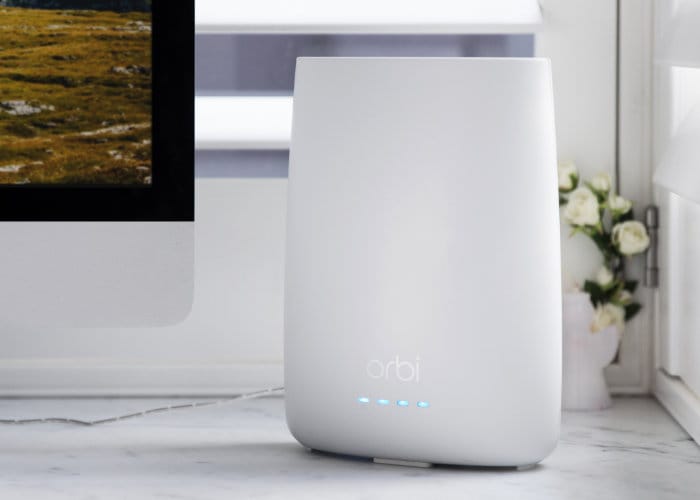 Netgear has this week announce the availability of a new tri-band mesh router in the form of the Orbi which is priced at $300 and provides a Tri-Band wireless cable modem router. Netgear has also made available the Orbi Whole Home WiFi System reference CBK40, consisting of the Orbi Tri-Band WiFi Cable Modem Router plus 1 Orbi satellite priced at $400.
The system is capable of creating a wireless mesh network over 4000 ft² which can be expanded even further using Orbi Satellites each of which add 2000 ft² per satellite.
– The new Orbi integrates a DOCSIS 3.0 CableLabs -certified cable modem with 32 x 8 channel bonding. It simultaneously supports 32 downstream bonded channels for maximum performance and download speeds up to 1.4Gbps. This provides uninterrupted connections for smooth streaming of HD videos, movies and music, more responsive online gaming, and faster file downloads — even during the most congested traffic hours on your cable Internet provider’s network.
– The Orbi router delivers high-performance WiFi up to 2.2Gbps for the devices connecting over WiFi on your home network, with MU-MIMO and a powerful quad-core processor for better 4K HD video streaming, VR gaming, web surfing, and more. Its Smart Connect Technology-intelligently chooses the best WiFi band for your devices to avoid interference and optimize network performance, while Beamforming+ improves speed and range for both 2.4 and 5GHz devices. You’ll enjoy Orbi features like guest WiFi network and four Gigabit Ethernet LAN ports for connecting wired devices for even faster file transfers and reliable connections.
For more information and full specifications jump over to the official Netgear press release by following the link below.