I have watched this video like a hundred times today and for some reason, I laugh each time. When I hear NASA and scientists, I tend to assume folks know a thing or two about what they are doing. A group of said scientists from NASA tried to launch a space balloon in Australia recently.

Someone was videotaping the entire thing and the balloon looked to be in trouble from the get go as it was a long way from directly over the multi-million dollar payload. The balloon slipped free the surly bonds of the crane holding it back and proceeded to take out frustration on the payload and a car parked nearby. 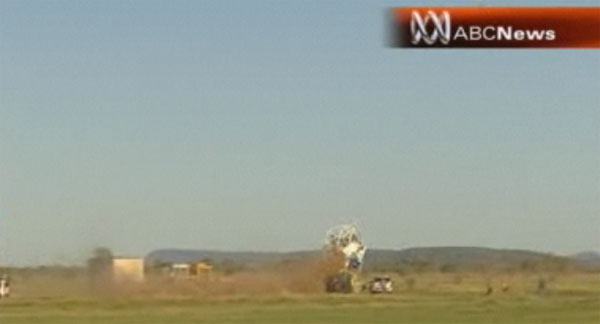 The huge payload crushed the vehicle and flipped it over. It also undoubtedly scared a few years off the lives of the people running wilily nilly around the launch site screaming for mommy and cursing the winds. The part that really gets me though is that the person in the background just as the payload crushes the car is just sort of walking along as if it’s all no big deal. I’m not sure what caused the problem with the launch, but we can’t rule out the possibility that Russell Crow’s giant ego somehow affected the crane.