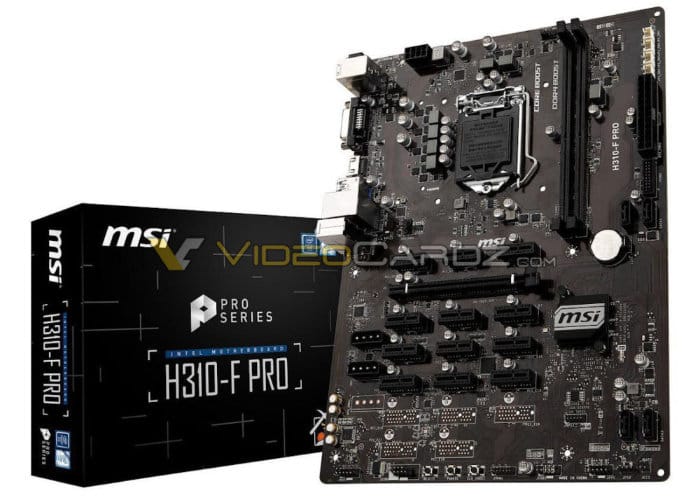 Even though the price of crypto currencies is in a downward spiral at the moment, hardware manufacturers are still creating new mining motherboards and graphics cards specifically designed to squeeze every last bit of processing power into mining crypto currencies. A new addition to the range of mining motherboards created by MSI has been revealed this week in the form of the MSI H310-F Pro.

The MSI H310-F Pro offers owners 13 GPU slots for mining and has been designed to support Coffee Lake processors offering a LGA1151 socket for the likes of Pentium and Celeron CPUs, a popular choice of crypto currency miners.

The MSI mining motherboard is equipped with 12 PCIe x1 and one full-sized PCIe x16 slot enabling the motherboard to accept 13 graphics cards in total and includes Molex power connectors for additional power to the bank of GPU cards. Other features include two DDR4 DIMMs and four fan connectors, you can also expect MSI to provide a BIOS with plenty of crypto currency mining specific features, but as yet these have not been revealed or confirmed.

You may have also noticed from the image above that the MSI H310-F PRO motherboard has space for additional 5 PCIe x1 slots, but due to chipset limitations, those are unavailable on this mining motherboard, and are expected to be utilised by B360-based motherboards. Unfortunately, no information on pricing or worldwide availability has been released as yet MSI, but as soon as more information comes to light, we will keep you updated as always. In the meantime for full specifications jump over to the official MSI website.