Last week we saw a leaked photo and found on some specifications on the new Motorola Moto G, and now it looks like Google Will announce the handset on the 13th of November.

Google has now launched a new website for the Motorola Moto G, and it has the date of the 13th of November on it, which we presume is the date the handset will be announced. 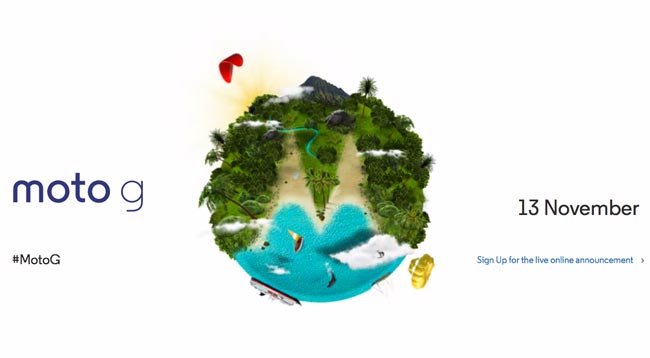 It looks like Motorola will also provide a video feed of the announcement, as their website says ‘sign up for a live online announcement’ for the new Moto G.

The Motorola Moto G is said to come with a 4.5 inch HD display with a resolution of 1280 x 720 pixels at 329 pixels per inch, processing will be provided by a quad core 1.2GHz Qualcomm Snapdragon processor.

Other specifications on the Motorola Moto G will include HSPA+, Bluetooth 4.0 and WiFi, the handset is said to come with a 1,950 mAh battery.

It looks like this handset could be released internationally at the same time, the Motorola Moto X is only available in the US, and it looks like the Moto G will be the first of these new Motorola handsets to launch outside of the US.