Deep within the bowels of the blogosphere there lay a blog called the Infinity burial project. It’s a DIY endeavor by this artist-slash-researcher Jhae Rim Lee who wants to find a better way to die. Naturally, of course. 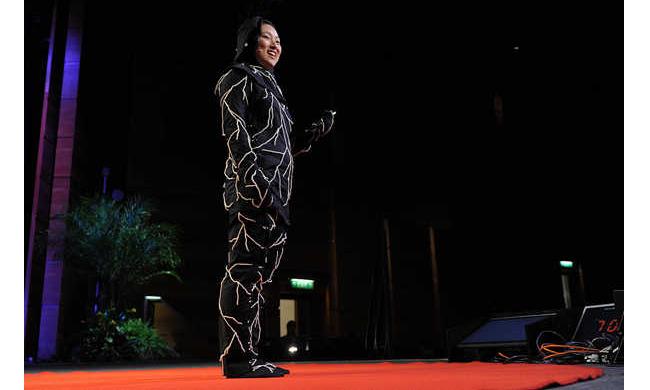 See, Jhae Rhim Lee wants to use mushrooms rather than soil to decompose the body. According to her, mushrooms are nature’s best decomposers and absorb all sorts of toxins.

But the real eye grabber about Lee’s home research–she has a small lab in her crib–is the death suit she made. A prototype at the moment, the death suit (pictured above) is an all-covering garment whose threads are seeded with mushroom pores.

So the whole idea behold the Death Suit, which sounds cool by the way, is the person is lain on the ground and subsequently broken down by mushrooms.

If you happen to be wondering what kind of mushrooms Lee cultivates at home, so far she’s been ‘training’ shiitake and oyster mushrooms (now called Infinity mushrooms) to feed on her dead hair. At the moment she’s still experimenting with her suit.

Anyway, as disturbing for some this bit of news might be, we feel compelled to laud Jhae Rim Lee for pushing the boundaries of innovation. Death is awfully wasteful in our modern consumer society and there surely isn’t enough real estate to bury the vast graying popualtions of industrialized countries. Not that we’re proposing soylent green, but Jhae Rhim Lee’s idea has its merits. It would be good for nature to be fed our bodies. Dust to dust.