Microsoft has released more details about the mechanics of their new Xbox 360 system and has revealed how the new 360’s CPU and GPU are combined into the same chip.

The new Xbox 360 chip is the first mass-market, desktop-class processor to combine a CPU, GPU, memory, and I/O logic onto a single piece of silicon. 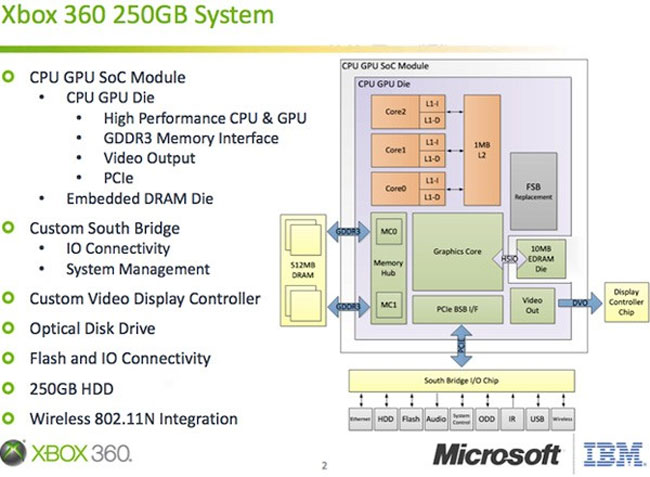 The new Xbox combined chip has only 372 million transistors, which compared by today’s standards is not a huge amount. For example an old 65nm Pentium D 900 from 2006 has almost the same (376 million), while the upcoming 45nm Core i5-760 has almost double the transistor count (774 million).

If you take a look at the block diagram above, you’ll notice that most of the blocks are fairly obvious: the triple-core CPU is there, as is the ATI-designed GPU, and then you have the dual-channel memory controller and I/O. But the purpose of the “FSB replacement block” may not be obvious. This particular block essentially implements a kind of on-die “frontside bus” with the exact same latency and bandwidth characteristics as the older bus that connected the CPU and GPU when they were discrete parts.

Via Engadget Via Arstechnica