Microsoft has just released its earning figures, confirming Microsoft sold 8 million Kinects over the holiday period and
showing a second quarter revenue of $19.95 billion, a 5% increase from last year. With Operating income and net income for the quarter were $8.17 billion and $6.63 billion, a decrease of 4% and 0.4%, respectively, over the same time last year.

And released figures showing that Microsoft sold a massive 8 million Kinect devices in juts 60 days over the holiday period. 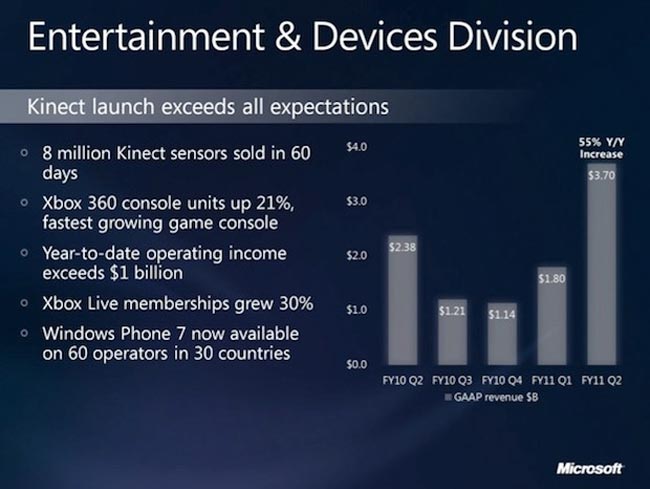 “We are enthusiastic about the consumer response to our holiday lineup of products, including the launch of Kinect. The 8 million units of Kinect sensors sold in just 60 days far exceeded our expectations. The pace of business spending, combined with strong consumer demand, led to another quarter of operating margin expansion and solid earnings per share growth.”

However revenues for the Windows division were down 29.7 percent to $5 billion. Operating profits were also down by about $2 billion even thought more than 20 percent of PC worldwide now run Windows 7 OS.