Microsoft is now buying iPhones in exchange for a $200 gift card for the Microsoft Store. It’s a limited time promotion that started on September 27th and will end on November 3rd. Anyone looking to get rid of an iPhone 4s or 5 can get a nice chunk of change towards a Microsoft device of their choice.

You can only trade one iPhone per person, and it must come with the power cord and not be password protected. You also have to trade it in a Microsoft retail store; the deal is not available online. 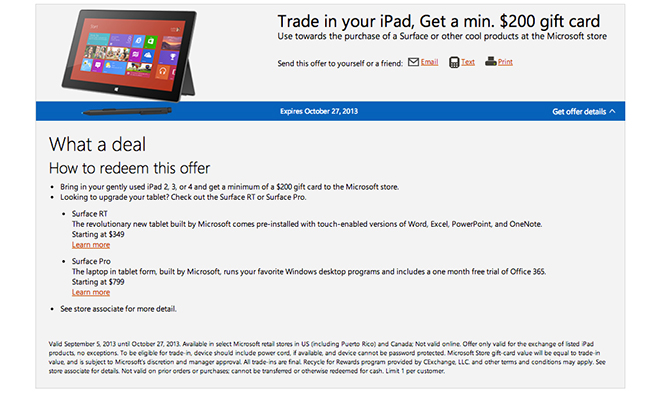 It’s a smart move really. They take i-devices off the market and pretty much force people to buy their products instead. It’s a win-win for Microsoft, and they’re not even giving you that much money, especially in the case of the iPads. You could easily sell an iPad for more than $200.

It is sad you can’t use the money towards an Android, but I think i-addicted people should take a moment to objectively look at what else is out there before this promotion ends.

Does this offer appeal to any of your i-philes out there?