We told you back in October that Microsoft had reached an agreement with the European Union to give Windows users the choice to install an different browser to Internet Explorer on their Windows PCs.

Today the European Union has confirmed that the Antitrust case against Microsoft has ended, and that from March 2010, all users of Windows will get the option to install up to twelve different browsers when they install Windows or buy a new PC. 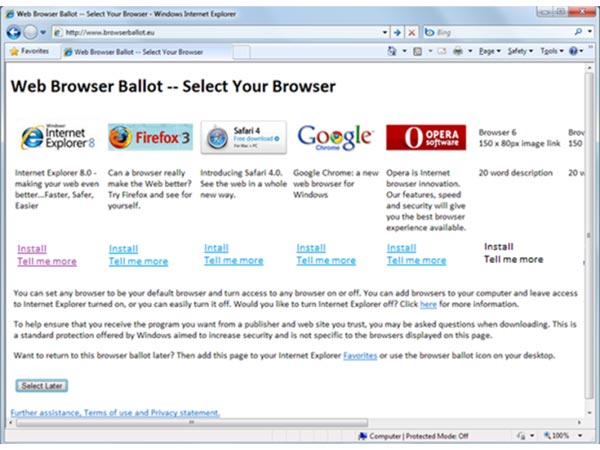 The European Competition commissioner Neelie Kroes announced the news today, “Millions of European consumers will benefit from this decision by having a free choice about which web browser they use,”

The European Union will be keeping a close eye on Microsoft to make sure they deliver, and as they have now reached an agreement, it has become legally binding.

If Microsoft fail to deliver on their promises they could end up paying fines of up to 10% of their annual turnover under European Law.

This is great new for consumers who will now be given a choice of browsers to install, I wonder how this will effect Internet Explorer’s market share, I suspect we will see a significant drop when this comes into effect as the average PC user will now have a lot more options to choose from.