Gregory L Holloway based in the UK has created an awesome mini Arduino powered laser cutter and engraver called the MicroSlice which is available to pledge for £199 over on the Kickstarter crowd funding website. 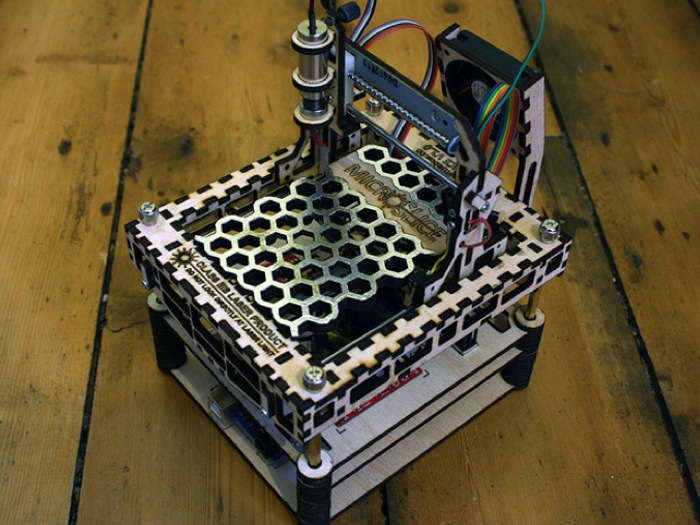 The design for the MicroSlice laser cutter and engraver has been developed as an entrant into the 2013 Radioshack Microcontroller Contest which went on to win the competition.

The MicroSlice laser cutter and engraver offers a working area of 50 x 50mm and is capable of cutting through paper and engraves wood & plastic using a 100mw Red Laser Diode, like you’d find inside a DVD-RW drive, which does the cutting and engraving. The project also has a 200mw laser available in the Powered-Up Kit.

“The MicroSlice works in exactly the same way as larger professional laser cutters. There are two stepper motors which move the X & Y Axis, a fan for ventilation, and there’s even a honeycomb cutting table, just like the pro machines! “

The MicroSlice project is currently over on the Kickstarter crowd funding website looking to raise enough pledges to make the jump from concept to production. So if you think MicroSlice is something you could benefit from, visit the Kickstarter website now to make a pledge and help MicroSlice become a reality.