If you were around back in the days of the NeoGeo console, you may recall the Metal Slug game. That title was a 2D shooter that had blocky graphics and was one of the more popular games on the console. There have been a few refreshes of that game over the years for PC gamers. 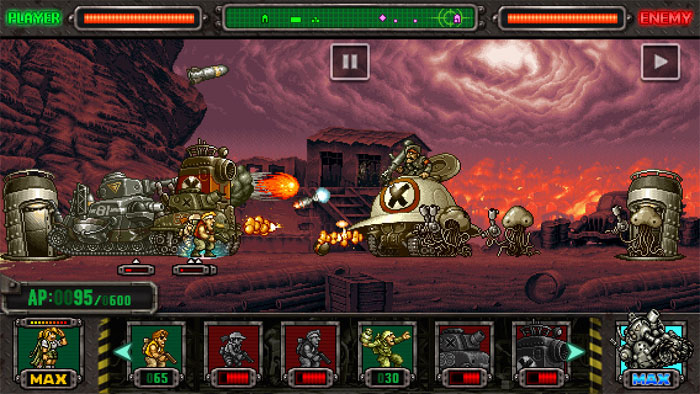 A new title in the Metal Slug franchise has launched called Metal Slug Defense. The game is a tower defense/strategy title that has the same dot pixel graphics that the original NeoGeo game featured. Both Android and iOS gamers can get the game right now.

It features over 60 playable characters and units. Weapons can be upgraded, as can units as more experience is gained. Over 100 background stages are featured from the Metal Slug series. WiFi battles against other layers are supported giving the game multiplayer attributes. Metal Slug Defense is a free to play game, but it is supported via in-app purchases.

“‘METAL SLUG’, the worldwide famous 2D action-shooting game series, returns in a Tower Defense / Strategy game on iOS and Android devices! “METAL SLUG DEFENSE” not only reproduces perfectly the intricate dot-pixel graphics and simple game controls that made the success of the series, but also adds a touch of strategy. Make effective use of the abilities of each character and smash Morden’s enemy troops!”