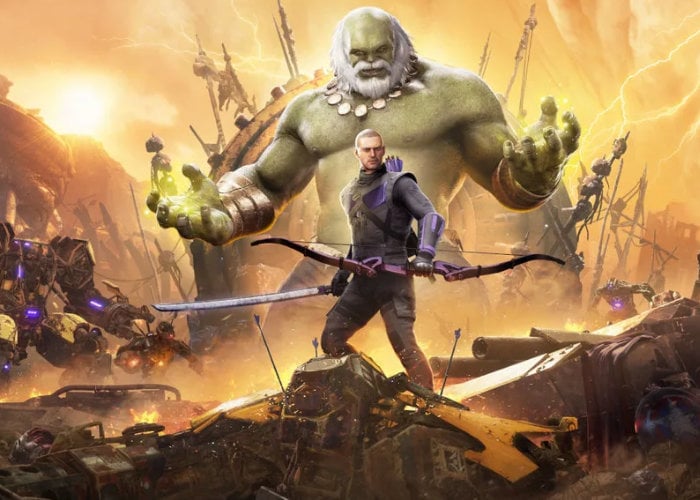 Leyla Karasuma from Crystal Dynamics has taken to the official PlayStation blog this week to reveal more details about the latest character to join the Marvel’s Avengers game. On March 18th 2021 Hawkeye will join the Marvel’s Avengers team, bringing his own storyline to explore and complete. As you would expect Hawkeye is equipped with three different arrow types : His Assault Heroic uses Nightstorm Arrows: launch it into the air and rain down projectiles to decimate areas of the battlefield. Just as important, his Recovery Arrow Support Heroic unleashes nanobots that swarm nearby allies and restore their willpower. The Hunter’s Arrow Ultimate Heroic is an AI guided projectile that flits across the battlefield, piercing through targets. Check out the announcement trailer below to learn more about the Hawkeye storyline and Clint’s Heroics.

“Hawkeye’s story brings us face to face with a possible future where all hope is lost. With his bow and sword at his side – and the help of the rest of the Avengers – Clint must stop an invasion that would turn the world to ruin. “

“Clint Barton is the original Hawkeye: a peerless marksman, master swordsman, and proud dog parent. Clint first appeared in Tales of Suspense (1954) #57, and his first solo comic series was Hawkeye (1983) #1. From his humble heroic beginnings in the circus troupe that taught him how to handle a bow and sword, to his life as a crime-fighter operating out of his New York apartment, to a secret SHIELD agent, and, finally, to a member of the Avengers, his skill and devotion to justice earned him recognition, opportunity, and friendship among Earth’s Mightiest Heroes.

However, despite his impressive skillset and the trust of his teammates, he found himself grappling with feeling like he couldn’t make a meaningful contribution to the super-powered, superhuman Avengers team. In Future Imperfect, a storyline inspired by Marvel Comics’ Old Man Hawkeye series and the Hawkeye (2012) “My Life as a Weapon” storyline, you will be taking Clint on a perilous journey to a future Earth and stepping into a new biome known as the Wasteland to find the missing Nick Fury, come face-to-face with the villain Maestro, and save the world. Did we mention his canine pal Lucky will also be featured in this Operation?”