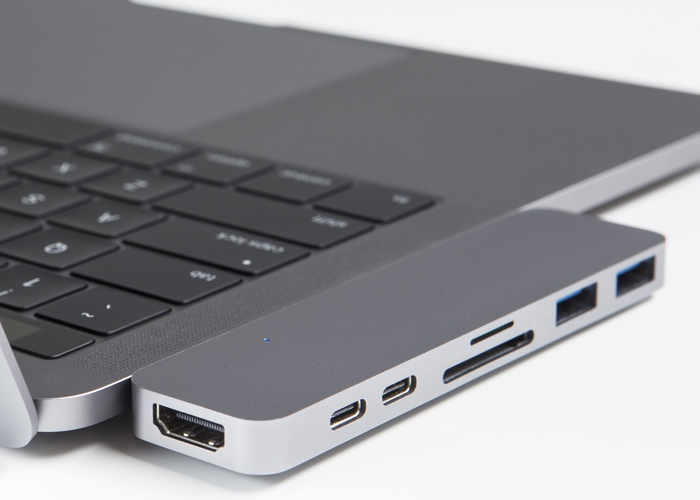 MacBook Pro owners that would like access to additional ports on the Apple laptop may be interested in a new piece of hardware which is being created by Hyper based in San Francisco California.

As you can see from the image above the sleek USB-C hub adds a wealth of additional ports to your mobile system including HDMI, 2 x USB 3.1, a handy microSD and SD card reader and Thunderbolt 3 and USB-C ports.

Watch the video below to learn more about the new hub which is available to back via Kickstarter and has already blasted past its $100,000 pledge goal with still 41 days remaining on its campaign. The development team behind the new adapter hub explain a little more about its design and features.

Unlike most USB-C dongles which still run on slow USB 3.0 (5Gb/s) speed, HyperDrive is 9X faster (45Gb/s) by using not one but two Thunderbolt 3 USB-C connections. Other Thunderbolt 3 docks are as big as a brick and nowhere as portable as the HyperDrive. HyperDrive is the first and only hub designed to tap into two Thunderbolt 3 USB-C ports on the MacBook Pro for maximum bandwidth, to deliver more ports in the smallest footprint. With HyperDrive, you get the most commonly used ports, found in preceding 2015 MacBook Pro model. This is the adapter Apple should have provided with every 2016 MacBook Pro.

For more information on the new Hyper USB-C hub jump over to the Kickstarter website for details by following the link below.