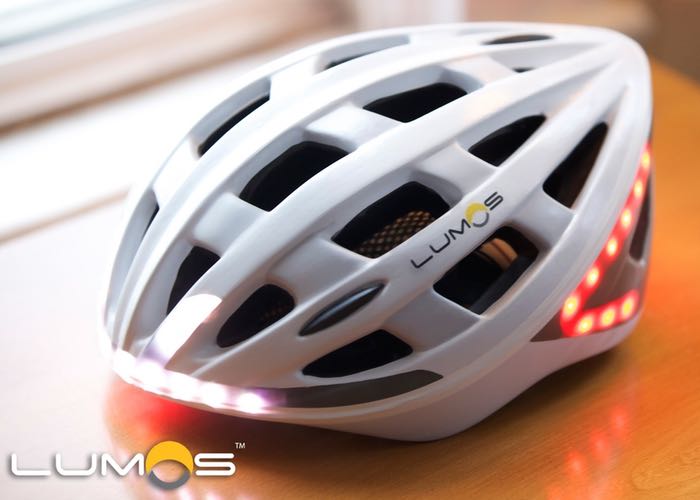 A next-generation bicycle helmet has been created and launched in the form of the Lumos, which is equipped with both brake lights and indicators, to make sure that other vehicles on the road know exactly what you are doing.

The indicators and brake lights are positioned on the rear of the helmet and connect to a wireless controller on your handlebars, that enables users to control the indicators wirelessly when turning.

Watch the video below to learn more about the innovative Lumos bicycle helmet, that is also equipped with a forward front facing LED light strip and illuminated rear triangle to provide extra safety while cycling your bike during the night. Its creators ask the question :

Have you ever wondered whether the car driver behind you understands (or even sees) the hand signal you just gave? Have you ever found yourself in a situation where you felt it was more important to have both hands on the handlebars than to continue holding out your hand to signal?

We did. Thats why we made turn signals an integral part of Lumos’s design. You activate the turn signals via an included wireless remote. Once activated, bright yellow lights on the helmet turn on to form an arrow on the back, and a dash from the front to indicate the direction you wish to turn. Just press the button again to turn the signal off.

The Lumos bicycle helmet is currently over on the Kickstarter website looking to raise $125,000 which it has already blasted past thanks to over 1,120 backers who have pledged $85 or more to be able to get their hands on the very first cycling helmets off the production line.