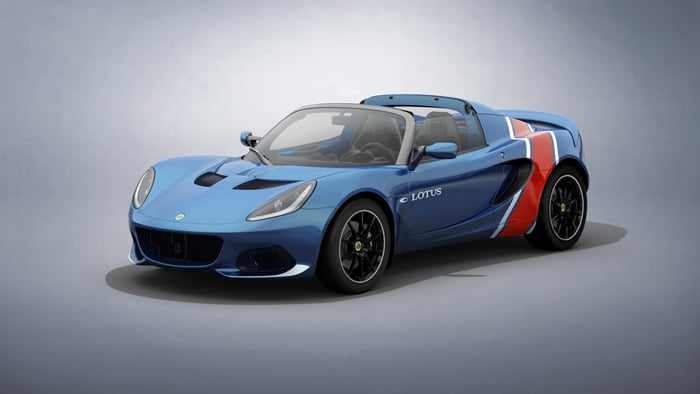 Lotus has announced four limited-addition versions of the Elise that each feature an exterior color combination meant to remind of some of the iconic racing cars from Lotus history. The liveries include a black and gold version meant to remind of the livery of the Lotus Type 72D raised by Emerson Fittipaldi in 1972.

The red, white, and gold version echoes the Type 49B raced by Graham Hill in 1968. The blue, red, and silver car is a nod to the Lotus Type 81 raced in 1980 by Nigel Mansell, Elio de Angelis, and Mario Andretti. The fourth car is blue and white, a throwback to the Lotus Type 18 driven by Sir Stirling Moss in 1960.

Only 100 of the cars will be built with demand for each variant determined by customer request. The cars will have unique interior and exterior features along with standard equipment typically optional on the Elise 220 the Heritage Edition is based on. Pricing in available markets will be £46,250, and each car comes with a special plaque showing its build number.