I don’t mind decorating for Christmas, but I am not a big fan of getting on the second story roof. The height doesn’t bother me, it’s the fear of that squishy splat when I fall off that scares me. I hang lights on the lower part of my house and other places though so I am no scrooge. I understand folks that don’t want to decorate though and I would rather people not decorate than decorate and just leave the stuff up all year. 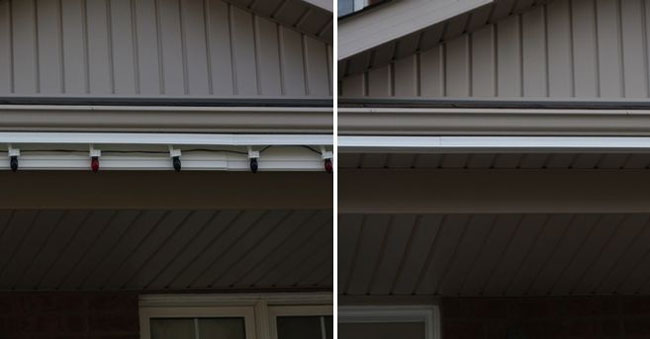 A guy down the street from me decorated last year and left the lights on a timer that turned on every night until March. He unplugged the timer then or at least blew a fuse and just left the stuff there all year. If you are the sort that wants to decorate and just leave the stuff up for next year, do your neighbors a favor and get the LiteLocker.

This system hangs under the eaves of your house and hides your lights after the holiday is over so you don’t have to take them down. In these photos, they stick out pretty badly. I would be you could paint them though and be fine. I really don’t see someone too lazy to take lights off their house spending the time and money to install the LiteLocker though.