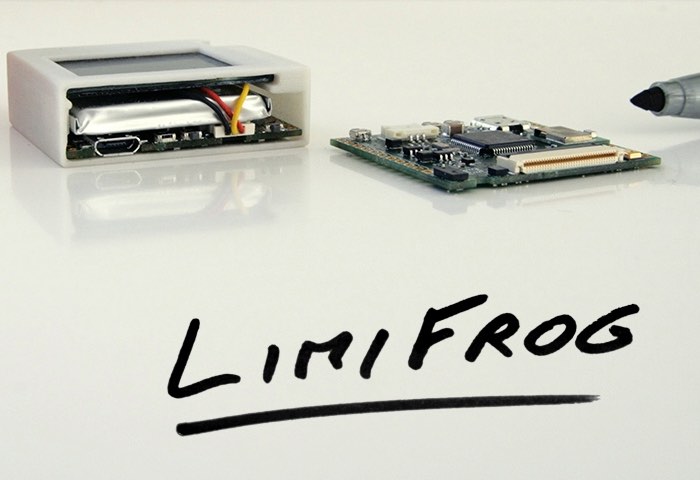 Makers, developers and hobbyists that enjoy building projects that embrace the Internet of Things, may be interested in a new prototyping board that has been developed called the LimiFrog.

The LimiFrogPrototyping board is equipped with an ARM Cortex-M4 based processor and 8MB of flash storage together with a 500mAh battery that is capable of providing up to weeks of battery power for your project depending on the resources used and LimiFrog comes in different configurations.

Xavier-C the developer of LimiFrog explains more about the inspiration behind the compact prototyping board designed for developing Internet of Things projects :

It all started over a year ago. I was working on a wearable accessory and I needed a credible demonstrator. Powerful enough to demonstrate the main features. Small enough to convince people this may one day end up on their wrist or inside their pocket. Since the platforms that were around did not satisfy me (too limited, too cumbersome or too power-hungry), I set out to develop my own custom board. Along the way, people liked it and told me: “hey, with what you’re packing in there, that would be a cool platform for a lot of other projects, you should open it !”.

Finally I followed that advice, enhanced a bit the board for maximum versatility and, with the help of a few folks, worked on the software to make the whole thing easy to use …and here is LimiFrog ! LimiFrog also includes standard features such as LEDs and programmable switches, as you would expect. Don’t need the full set of functionalities?

Learn more about the LimiFrog board over on the Kickstarter crowdfunding website where it is available to back from just €39.